Gulke: Being Naive can be Misleading 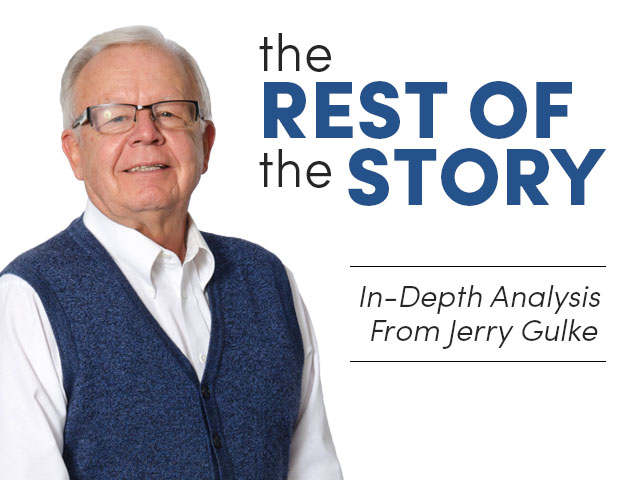 Weather markets are always difficult to analyze as they often move higher and lower than rationale economic value suggests based on supply/demand.  Arriving at the supply and then demand is the premise of what price discovery is based upon.  Add in weather and now geopolitics, and the task gets more difficult, especially in the current environment of tariffs, threats of retaliation and news reporters becoming market analysts.

Immersed in all this are two popular beliefs give me pause and concern.  The first is that the current trade and tariff dispute will end sooner than later, perhaps before the fall elections.  The second is the idea that China has to come to the US eventually to fill their needs for soybeans.  The idea that China is against the ropes and a solution is imminent is a dangerous presumption and ignores Chinese strategy. What we have stated by the actions of threats of tariffs is that when it comes to food, the US may not be a reliable partner.  If the shoe were on the other foot, you can be sure we would do what we could to find an alternate source, even if it took a while.  To think China would react the way they have without a forethought plan, is underestimating a culture that has seen countries like ours come and go over the centuries. The trade issues at stake seem too complicated to settle over a cup of tea and a few meetings.  The danger lies in the process taking months to resolve.

No doubt there is a political advantage to have the farm states support Trump and the Republican Party but prices of both corn and soybeans have risen enough to offer the opportunity for a profit, something one may not be able to say about the prior two to three years.  Furthermore, I don’t think President Trump is all that concerned about Agriculture complaining about being singled out; he may be led to believe that there are funds sufficient in the CCC (Commodity Credit Corporation) for a short term fix.   Our Secretary of Ag has stated that in order to have a more perfect playing field, everyone will have to suffer a little, meaning it isn’t going to be roses for everyone.  That leaves the idea that China will indeed need to buy soybeans eventually from the US regardless of the evolution of tariffs and trade.

The popular rhetoric in the media seems to be that China stuck and have no alternative but to buy from South America all they can, and then go to the US perhaps next fall.  Should the trade talks take longer to resolve, it is possible China could begin to wash out purchases of cargoes of soybeans forcing their crushers and feeders to either switch to more corn from non-US sources or use alternate sources of protein.  Canada is a source of soybeans that few are discussing.  Rapeseed, cotton and palm meal are just a few of alternatives that could reduce demand for soybeans and soymeal a few percentage points over time. It also has corn stocks it has been trying to get rid of that could affect feed rations. A 5-10% change into alternatives of feed-grains or DDG’s is not all that difficult in a centrally planned economy. I think assuming China has no other option but to come to the US with their back against the wall is not only arrogant but naïve as well. The complex situation we find ourselves has caused traders to oversimplify solutions, but we all can have an opinion and that is what makes a market. Over time fundamentals will rule out but in the meantime the market may remain irrational.

If China somehow can force a slowdown in bean demand, it may bring an era of more controlled prices and our free market may be in jeopardy, especially if our government gets involved with protecting the Ag sector. The yet unknown is the effect of any failure to resolve trade issues, tariffs and retaliation.  The underlying concern for me is whether or not we have irrational exuberance concerning year over year demand increases.  Are research firms merely on the same band wagon and extrapolating the past into the future?  No doubt there is room for more than one scenario and to think/believe that China will get caught in the belief that “they have to buy from the US” is tantamount of giving new meaning to the word “naïve”.

If the tariffs and retaliation and renegotiation of NAFTA weren’t enough, the US dollar is exploding which is not good for US exports in general and may be as big a deal as trade psychology.  We certainly don’t need barriers AND a strong dollar.  While we are still below where we were when Trump took office, the vertical climb is concerning nonetheless for Ag.   See chart below.

In addition having read this column and other columns in Top Producer or DTN, you should already be aware that we have been friendly corn since last fall.  An updated December corn chart is also shown below for your info!

Special Offer:  A wise trader once told me that what you read for free may be worth about what we paid for it. That is true for TV,  and the internet.    While I hope I have stimulated your interest beyond the information overload one has to deal with now days, there have been no obvious outright recommendations and rightly so as we (Gulke Group) have clients from throughout the US and some foreign areas as well that pay for our expertise and our decades of experience.   If you are interested in trying our daily services/recommendations we are offering a free 30-day trial good until May 10th.   Just go to [email protected]  and request the trial subscription, or just phone 480-285-4745; 707-365-0601.