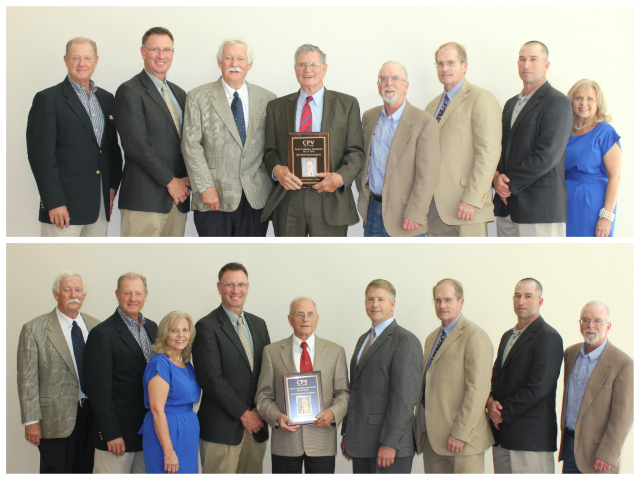 Honoring their significant contributions to the beef and dairy cattle industry, David Bechtol, D.V.M., and Maarten Drost, D.V.M., were inducted into the Cattle Production Veterinarian Hall of Fame (CPVHOF). Established in 2011, CPVHOF recognizes the rich traditions of production veterinary medicine and honors the distinguished individuals who have made a lasting impact on the profession. The Hall of Fame is sponsored by Merck Animal Health, the American Association of Bovine Practitioners, the Academy of Veterinary Consultants, Bovine Veterinarian magazine and Osborn Barr.

“The beef and dairy industries have been fortunate to have benefited from the wisdom, vision and determination provided by these remarkable men,” said Rick Sibbel, D.V.M., director of beef technical services for Merck Animal Health. “Drs. David Bechtol and Maarten Drost have been leaders, teachers and innovators and have significantly advanced feedyard management practices and bovine reproduction.”

The new inductees were honored at the AABP Annual Conference in Albuquerque, New Mexico, in September and were chosen by their peers, including members of AABP and AVC.

David Bechtol, D.V.M. – Beef Inductee
For 35 years, Dr. David Bechtol, of Canyon, Texas, has been operating a consulting business and feedyard research facility in the Texas Panhandle. Last year, he was named one of the 20 most influential beef and dairy veterinarians in the United States.

After graduating from the Texas A&M University College of Veterinary Medicine in 1965, Dr. Bechtol started a swine and feedlot practice in Dimmitt, Texas. In 1979, he established Palo Duro Consulting Research and Feedlot.

Dr. Bechtol was a charter member of AVC, has been a member of AABP for almost 50 years and served as president of both organizations. He was named the AABP Practitioner of the Year Award in 1981, the AVC Consultant of the Year in 1986 and received the AABP Award for Excellence in Preventive Medicine for Beef in 1998.

His award was presented by Mark Spire, D.V.M., M.S., D.A.C.T., technical services manager for Merck Animal Health, who has known Dr. Bechtol for more than 40 years.

“I’ve gained a deeper appreciation for Dr. Bechtol’s excitement in adopting new technologies into our profession and the discovery of the how and why things are as they are,” Dr. Spire said. “He has managed to get wiser with age while retaining his boyish enthusiasm for life. It was my great pleasure to present him with this award.”

Maarten Drost, D.V.M. – Dairy Inductee
Dr. Maarten Drost, of Gainesville, Florida, is well-known for his work in embryo transfer technology and mechanisms of pregnancy recognition and fertility management in cattle. He is a world-renowned expert in bovine reproduction, and his slides and videos of cattle palpation and parturition have been reproduced and used throughout the world. Through The Drost Project, Dr. Drost has lectured and taught workshops in more than 19 countries in both English and Spanish.

On the national stage, Dr. Drost served as president of the American College of Theriogenology. In 2003, he received the Pfizer Teacher of the Year Award. He also was recognized by Iowa State University in 2004 with the Stange Award for Meritorious Service in Veterinary Medicine.

“Maarten Drost’s career has been amazingly productive, but he is such a humble man that you have to really research to find these things out,” Dr. Donovan said. “In retirement, he has continued his passion for teaching by further developing The Drost Project Visual Guide to Bovine Reproduction.”

About Merck Animal Health
Today's Merck is a global healthcare leader working to help the world be well. Merck Animal Health, known as MSD Animal Health outside the United States and Canada, is the global animal health business unit of Merck. Through its commitment to the Science of Healthier Animals™, Merck Animal Health offers veterinarians, farmers, pet owners and governments one of the widest range of veterinary pharmaceuticals, vaccines and health management solutions and services. Merck Animal Health is dedicated to preserving and improving the health, well-being and performance of animals. It invests extensively in dynamic and comprehensive R&D resources and a modern, global supply chain. Merck Animal Health is present in more than 50 countries, while its products are available in some 150 markets. For more information, visit www.merck-animal-health.com or connect with us on LinkedIn and Twitter at @MerckAH.