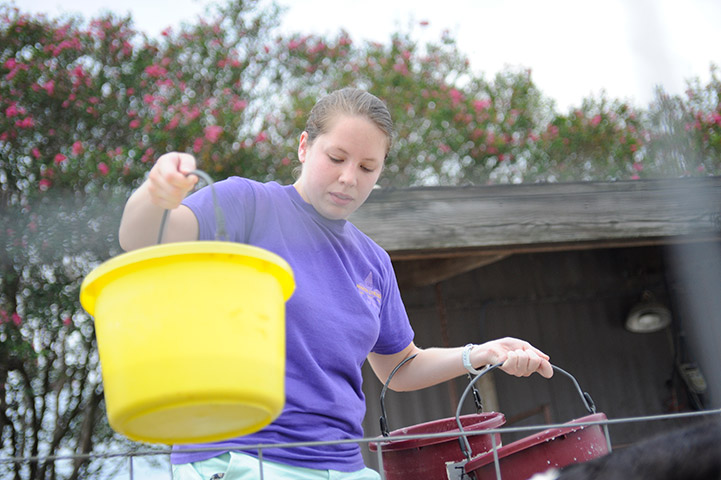 At 7 a.m., many Louisiana State University students are probably still in bed. Others are trekking from far-away commuter parking lots to their early morning classes.

But animal science junior Morgan Richard’s Thursdays begin quite differently – with 20 hungry calves mooing at her.

The sun is barely up at the Louisiana State University AgCenter’s Dairy Science Research Farm when Richard handles the morning feeding. For decades, students like Richard have made the short trip down Gourrier Lane to escape the chaos of LSU’s main campus and get valuable, real-world experience with animals.

Although it downsized last year and its milking herd moved to the AgCenter Southeast Research Station in Franklinton, the campus dairy remains home to calves being used in student and faculty projects. Richard, who is concentrating in dairy production, received an undergraduate research grant from the College of Agriculture to study how beta-hydroxybutyrate affects rumen development.

If the meters prove accurate enough, farmers and researchers may have a cheaper and quicker option to monitor glucose and ketone levels, which indicate the development of a calf’s ability to digest fiber and other solids.

Other students at the farm handle chores like feeding and cleaning, and still others are researching nutritional value of pre-mixed, commercially available feed versus feed that farmers mix themselves.

The students’ research doesn’t only help farmers. It also prepares them for graduate school. Richard hopes to get a doctorate and then teach and do research in reproduction physiology.

Much like a parent watching his or her children grow up, Richard notices all the little things about the calves as they get older. Some eat and drink more than others, and they each have their own personality, she said.

“In one of the classes, we actually get to break a calf” to be led by a halter, Richard said. “From working on the farm, I saw it being born, I helped it being born, I broke it, I showed it. Now it’s expecting its first calf. Just to see the life cycle, you really get to be close with them.”

That kind of interaction is critical for animal science students, said Gary Hay, director of the School of Animal Sciences.

“I always think of it this way – it’s kind of like getting a degree in music and not playing an instrument,” he said. “Hands-on experience and dealing with handling animals is very important to go along with a science background.”

“A lot of students come into animal sciences without any applied working knowledge other than maybe having a dog or a cat at home,” Williams said. “This gives them the opportunity to diversify their animal experiences and get a better understanding and appreciation of food animal production. When they’re interacting with people that aren’t involved in ag, they can explain how their food is actually produced.”

Williams said opportunities for hands-on experiences can spark students’ interest in dairy, which is important because that may lead them to a great career.

“My professors 30 years ago encouraged me, and I had no prior knowledge of dairy science until I came here to LSU,” Williams said. “I had never touched a dairy cow in my life except going to the fair in Washington Parish and petting one.”

Richard shares a similar experience with her professor. Although she showed a dairy cow in 4-H and FFA in high school, Richard didn’t consider pursuing animal science at college until she realized there were many opportunities for scholarships and internships.

“I just kind of fell in love with it,” she said. “I’ve been working here at the farm for the last two years, and it’s my first year doing research.”

About 20 students are in the dairy science area. The School of Animal Sciences has about 400 students, making it the largest department in the College of Agriculture. The animal, dairy and poultry (ADP) sciences bachelor’s degree has several concentration areas – animal science, dairy foods technology, dairy production, poultry science, science and technology, and pre-veterinary medicine.

While LSU is noted for the quality of its dairy program, Hay said, students in that area and the Louisiana dairy industry have both shrunk significantly since the 1980s. The U.S. dairy industry was affected across the board when the 1985 farm bill changed the way milk is priced.

In Louisiana and the Southeast, the effects of those events were exaggerated for a few reasons. Hay said there has been a population increase in Louisiana’s Northshore region, where there were once many dairy farms, which increased land prices.

Because of Louisiana’s warm climate, dairy farmers have always faced higher production costs. Those costs have risen even more, Hay said, because prices for milk that is bottled for drinking have not increased as fast as prices for “cheese milk” that is used in manufacturing. The Southeast is primarily a fluid market, meaning most milk produced in the region is for drinking.

“But the dairy industry in this country is still a very dynamic industry,” Hay said. “Every student we put through this program that has an interest in dairy, when they graduate, they’ve got a job waiting for them. It may not be in Louisiana, but we can find them a job – and some good-paying jobs.”

About 75 percent of ADP students start in pre-vet, Hay said, and while not all of them make it to vet school, that doesn’t prevent them from having a rewarding career. Many graduates go to work at companies such as Kraft, Frito Lay, Walmart and Purina, Hay said. Others take research jobs at pharmaceutical companies or at large farms in the three clusters of U.S. dairy production – the Southwest, upper Midwest and Mid-Atlantic.