Of all the factors affecting hay quality, stage of maturity when harvested is the most important and the one in which greatest progress can be made.  As legumes and grasses advance from the vegetative to reproductive (seed) stage, they become higher in fiber and lignin content and lower in protein content, digestibility, and acceptability to livestock.  The optimum stages of maturity to harvest for high quality and long stand life of many hay crops are listed in Table 1.

Making the first hay cut early permits aftermath growth to begin at a time when temperature and soil moisture are favorable for plant growth and generally increases total yield per acre.  The effects of stage of harvest on fescue hay quality and animal performance are shown in Table 2.  Similar effects have been noted with alfalfa (Table 3).  In both cases, early cut hay resulted in high-quality feed and superior animal performance. 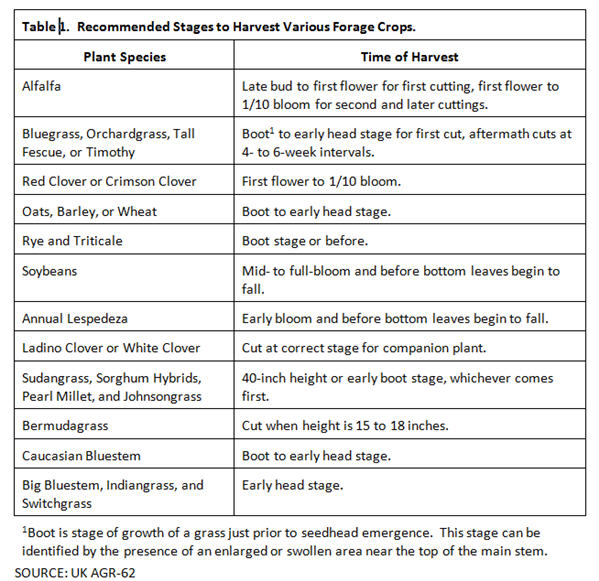 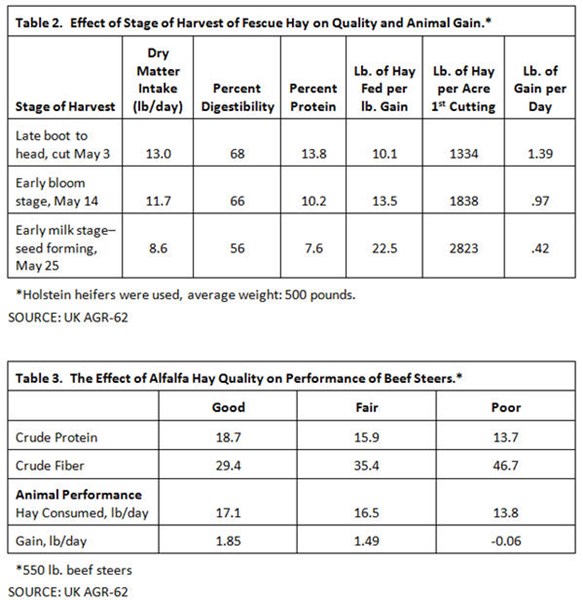 Hay plants with an 80 percent moisture content must lose approximately 6,000 pounds of water to produce a ton of hay at 20 percent moisture.  Crushing stems (conditioning) at time of mowing will cause stems to dry at more nearly the same rate as leaves.  Conditioning will usually decrease the drying time of large-stemmed plants by approximately one day and can result in leaf and nutrient savings. Raking and/or tedding while hay is moist (about 40 percent moisture) and baling before hay is too dry (below 15 percent moisture) will help reduce leaf losses (Table 4).

Hay handled in a rough manner before it gets to the animal can lose an excessive amount of leaves.  For the average bale (14 inches x 18 inches x 30 inches), about 29 percent of its total volume is contained in a 1-inch depth all around the bale.  For large round bales, the outer 4 inches contains roughly 25 percent to 30 percent of its total volume.  This means a large portion of the bale is exposed, and care in handling and storage should be practiced to minimize loss.