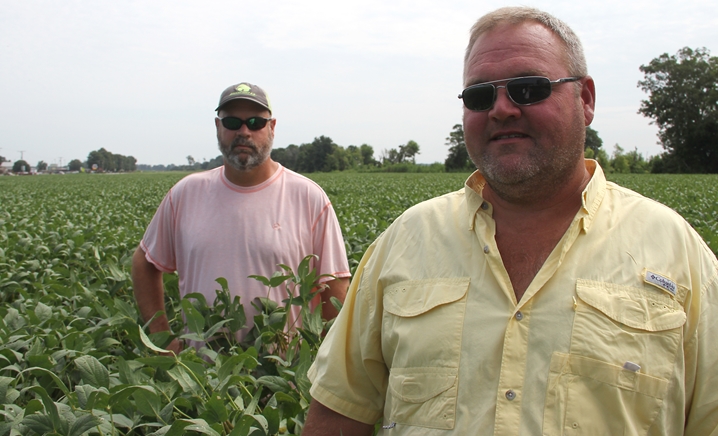 When a producer laces the gloves and climbs in the ring for soybean combat, a fine "cornerman" is vital. With yields consistently bouncing above 100 bu. per acre five times in four consecutive years, crop consultant Robb Dedman is among the best cornermen in the business, studying crop disease opponents, noting new varieties and minding soil fertility.

On a hellhound chase for yield, he’s an ever-present shadow in the fields of southeast Arkansas, walking rows from dawn to dusk. Chemical company, seed dealer or client farmer, Dedman picks and needles, peeling layers to the bone with incessant questions over costs and performance. As another 100-bu. acre fades in his rearview mirror, Dedman eyes far greater yield prizes.

On a steaming hot July afternoon, Dedman and producer Matt Miles are holed up beneath a churning air conditioner in a pre-fab building beside Miles’ grain bin facility in Desha County, Ark. Grain trailers roll in with first fruits, but planning for 2017 planting is already on as Dedman and Miles trade a flurry of insults. However, the argument is based in respect and trust: iron sharpens iron.

“I’m not a yes-man,” Dedman says. “If a farmer can’t swallow criticism, how does he get better?”

Dedman pushes a platform centered on solid agronomy, precise timing and critical adjustment to weather. All crops on Miles’ ground start at harvest of the prior year with soil and nematode sampling, fertilizer placement and fieldwork. Winter brings a mix of management decisions over methods to feed a crop. The layers of planning and preparation are aimed at one central question: What is the right seed on the right acre?

“We start researching what needs to be done for the beans rotating on and it’s never the same," Dedman says. "You can’t reach back and get a plan from three years ago and drop it on a field."

Poring over yield trial data from private results, University of Arkansas information and information from on-farm Pioneer strips, Dedman lets each number speak for itself. Miles and Dedman keep an open-door policy on new varieties, welcoming new seed into the mix.

“If a seed company approaches us, we offer a strip trial right away,” Miles says. “If they say no, then they can’t be confident in their variety, and neither are we.”

In a high-stakes game of mix and match, the strip trials are in steady motion, measuring distinct yield differences on three and four locations across the operation for the same variety. Each season, Dedman typically watches roughly 120 varieties, ranking the whole lot for yield, disease package, lodging, height, nodes and much more.

“I plead with farmers,” Dedman says. “Do research on your own soil because every farm has special fits.”

Optimal weather can hide a genetically weak variety during a single season trial, and Dedman gathers test variety data for three to four years to avoid the fallacy of a one-hit wonder. Essentially, the strip trial is the variety's job interview. If a particular seed does well, Dedman might recommend it for 200 acres one season, 400 acres the next, and on up the ladder.

Small steps prevent big losses. Several years back, a seed company offered Miles $15,000 worth of a new variety. Miles planted the whole lot and got burned with a $30,000 loss based on yield average. That made for a net loss of $15,000, but lesson learned.

“Cutting corners on seed is a big mistake,” Dedman says. “Choose a cheaper seed variety and you can save yourself into bankruptcy.”

Dedman is agriculture’s version of a chess player, consumed with the overall board while calculating the potential movement of individual pieces. The agriculture industry has changed from crop-specific consultant to general consultant, and the days of checking for bollworm and stinkbug have passed. Scouting, soil samples, fertilizer applications, soil amendments, yield maps, and data management, Dedman wears a multiplicity of hats. The age of harvest and go home have been replaced with at least some facet of agricultural activity 12 months a year, and Dedman relishes the never-ending cycle. “Robb has a desire to be the best,” Miles emphasizes. “He’s desperate to learn every new technology or technique. Without Robb, my right arm is gone.”

Dedman loves the challenge of the yield contests and says critics miss the point of pushing yields.

“If we find one technique or product that boosts yield by 5 bushels, the result is a win for everyone,” he notes. “We’re not a closed shop. Call me and I’ll tell you exactly what was done.”

Going against the grain, Dedman insists on inoculation every year. Increased numbers of rhizobium bacteria in soil lead to increased nodules, he says. Early nodulation is vital and allows for maximum nitrogen fixation. In 2016, he’s used Genesis Ag seed treatments and in furrow fertilizer, and says the soybeans jumped up early and strong.

“Seed treatments are expensive, but you know what’s more expensive? Replanting or losing a crop,” he says.

Timing isn’t everything, but it’s close, according to Dedman. Planting, weeds, irrigation, and nutrient applications all revolve around precise timing. Get in a big timing hole and kiss high yields goodbye. Many operations suffer from personnel disfunction and a lack of teamwork, an ill recipe that wreaks havoc on timing. Low yields are typically blamed on consultants first, weather second, but not so with Miles and Dedman. Credit is shared and blame is shouldered by all.

“Timeliness is crucial,” Miles adds. “Many people don’t recognize it, but timeliness is related to team. If Robb says to spray on Tuesday, then we spray on Tuesday. Our favorite term is ‘spot-on’ and we mean it. All the timing efforts collapse without team and trust.”

Dedman is no magician, he's just a man who sticks to farming simplicity.

“The crop is your child and you better act like it,” he says.

Food through roots and light through leaves, Dedman doesn’t stray far from agronomy 101: Plants are made to feed through roots and leaves are made to produce carbohydrates through photosynthesis. He follows the logic to spoonfeed soybeans beyond early application. Soybeans consume large quantities of potash, and Dedman says producers sometimes neglect this nutrient later in the season.

“You want big yields? Then you want big weight. Crops don’t eat everything at once and you’ve got to know your timing,” he says.

Basic agronomy doesn’t translate to basic technology. He uses FieldX for data management and AgPixel for aerial mapping, along with a host of apps: Ag PhD Fertilizer Removal, Plantometer, Apex, Pipe Planner, and many more.

Dedman also relies heavily on listening into Facebook and Twitter conservations to stay ahead of insect and disease pressure, and he says field management is only one part of social media’s value to agriculture.

“We’re getting our story to the public through the internet,” Dedman says. “Go to a non-farming town and you’ll still see some kid with a Deltapine shirt. Real Americans think farming is cool.” 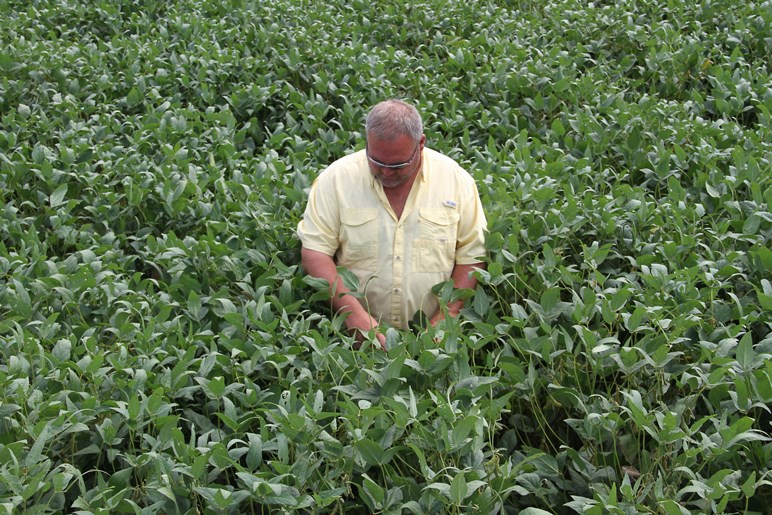 Nearly every day of crop season, at 6 a.m., Dedman is heading down a row, almost desperate to begin scouting.

“Dawn in a farm field is where you want to be," he says. "A feeling wraps around you and if you’re not happy, you can’t be made happy. I’m blessed to work with an incredible team and we give God the ultimate credit for everything we do, period.”

A day of scouting and data collection ends with an hour-drive home at 9 p.m. and a phone call packed with recommendations for Miles. It’s a wild schedule, and Dedman thrives in this pressure-cooker environment. Continuing education, field days, retail events, association meetings, and off-farm research, he stays hungry to learn and tries to attend anything that offers extra knowledge.

“Robb’s like a detective trying to find new products to give us any extra boost,” Miles adds. “He knows you can be the best consultant, but get hit with a hot, dry summer and look like an idiot. That’s what makes him so special.”

Jim Whitaker, another producer client in Chicot County, says Dedman’s countless hours searching for the next useful product pay off in expense and yield.

“Robb goes so far beyond a general consultant," he says. "He’s never satisfied and never stops learning something new about farming.”

When harvest dust settles in November, Dedman and Miles retreat to the farm office and spend several months, off and on, arguing and exchanging insults beneath a 60” widescreen displaying soil samples and yield data. By Jan. 1, they have a strong framework for the crop mix and management plans. Granted, it’s a guessing game, but they tilt the odds as much they are able.

Miles regards Dedman as a partner in change, and the unique duo never stop planning. Several years back, Miles put in an irrigation well for a single nine-acre block around his grain bins, an unheard of extra. He and Dedman are searching for an irrigation company to partner on the block for innovative research on chemigation and fertigation.

“When I start digging holes for drip, people will think I need to go to a mental facility,” Miles says. “Some of my buddies in other states make awesome corn yields with pivots and drip. Are we missing out?”

Scorn is a small price to pay to find success in agriculture. “If we put up a lateral pivot or drip, everybody in the county will think we’re nuts,” Dedman says. “Maybe chemigation or fertigation won’t work, but we want to find out for ourselves instead of talking about it.”

“I may go crazy one day, but it won’t be from the stress of dealing with the public,” he says.

Next season will find Dedman walking rows at dawn, speaking audibly to the crops, urging them to yield strong.

“I’ll talk out loud and tell the crops what we need. It looks like I’m alone, but God is right there walking beside me,” he says. “I’m one of the few Americans that wake up excited to get to work because farming is where it’s at, and I know how lucky I am. One more day to push yield and get better.”