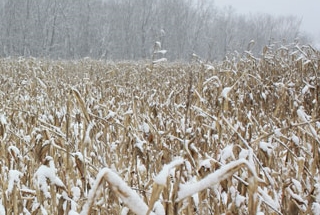 The first heavy snowfall in the state has put Ohio harvests behind schedule after an already difficult growing season due to last winter's brutal cold.

The Dayton Daily News reports heavy snow blanketed much of Ohio before one-fifth of the state's corn crop could be harvested. The wintry conditions mean farmers might have to work into December to complete their harvests. Miami County Farm Bureau President Bill Wilkins says farmers are running late when they're still harvesting after Thanksgiving.

Soybeans are also running late, with about 7 percent of the crop still to be harvested.

Farmers may also face a loss of yield from the wintry weather. Wilkins says soybean pods are at risk of opening in cold temperatures, and the weight of snow can cause cornstalks to collapse.