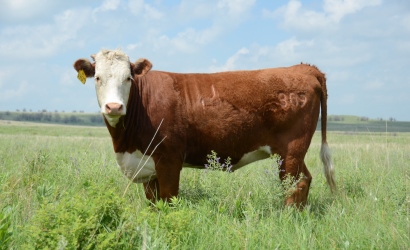 If you are like many in the cattle business, it is enjoyable setting ringside at any cattle show and becoming awed by the physical beauty of the cattle paraded in front of the scrutinizing eye of the judge. Some are almost flawless in design, fit to perfection and exhibited by someone with great showmanship skill and finesse. However, degree of condition, length and quality of hair coat and even a unique color pattern can obscure the true production qualities of this model phenotype.

Realistically, phenotype does demand a place in heifer selection but caution is essential if that criteria is priority-one in the selection process. Livestock judging 101 provides a foundation for visual appraisal and can be used effectively in identifying physical traits that are indicators of structural soundness and performance potential. Cattle with some angle to their hock and shoulder tend to have more longevity than those straighter in their design. Those with a bit more substance of bone and size of foot typically outperform finer featured individuals. However, those with a bit of additional, distractive hide in their neck and jaw area or more set to their hock may very well be as productive with as much maternal instinct and longevity as the neater, cleaner females.

Most cattlemen recognize the merit of utilizing some combination of physical and genetic indicators in their selection process. The following are five or those indicators that might deserve consideration:

While a desirable heifer phenotype is a priority for most cattlemen, that criteria may, or may not, be an economic indicator of herd production efficiency or profitability. Including a combination of visual, physical (pelvic measurement and reproductive tract score), genetic and ancestral considerations in the heifer selection process seems to be a sound approach. Recognizing the uniqueness of management systems based on the long term goals of that production program is extremely vital for cattlemen. Selecting heifers to meet those goals is very individualistic. Basing selection criteria on those of another producer may not result in long term herd profitability.