Hell Hornets: Giant Asian Species Set to Expand Across US?

Asian giant hornet, the largest hornet on the planet, reaching just over 2” long and packing a painful, tissue-destroying sting capable of sending allergic victims to the morgue, has gained a foothold in the U.S.
( Photo courtesy of WSDA )

The largest hornet on the planet, reaching just over 2” long and packing a painful, tissue-destroying sting capable of sending allergic victims to the hospital or morgue, has gained a foothold in the United States. The Asian giant hornet, which already causes 40-50 deaths each year in Japan and decimates honeybees, was recorded four times in Washington in December 2019—the first sightings in U.S. history.

Seldom does an invasive species’ immediate debut cause instantaneous alarm, but the stakes are high: If Asian giant hornet achieves long-term, established numbers in the U.S., its presence will make a substantial impact on the economy, environment and public health. Considering the insect’s menacing position in Asia and its ability to destroy a honeybee colony in just a few hours, U.S. officials aim to eradicate queens before the Asian giant hornet reaches a population tipping point. In short, the U.S. hunt is on and intensifying for the Asian giant hornet.

Drop in the Bucket?

Commonly present in Asia from India to Japan, it’s not known how the Asian giant hornet first arrived in North America, but speculation is centered on international trade. Prior to the Washington finds, Canada made two Asian giant hornet discoveries in fall 2019. 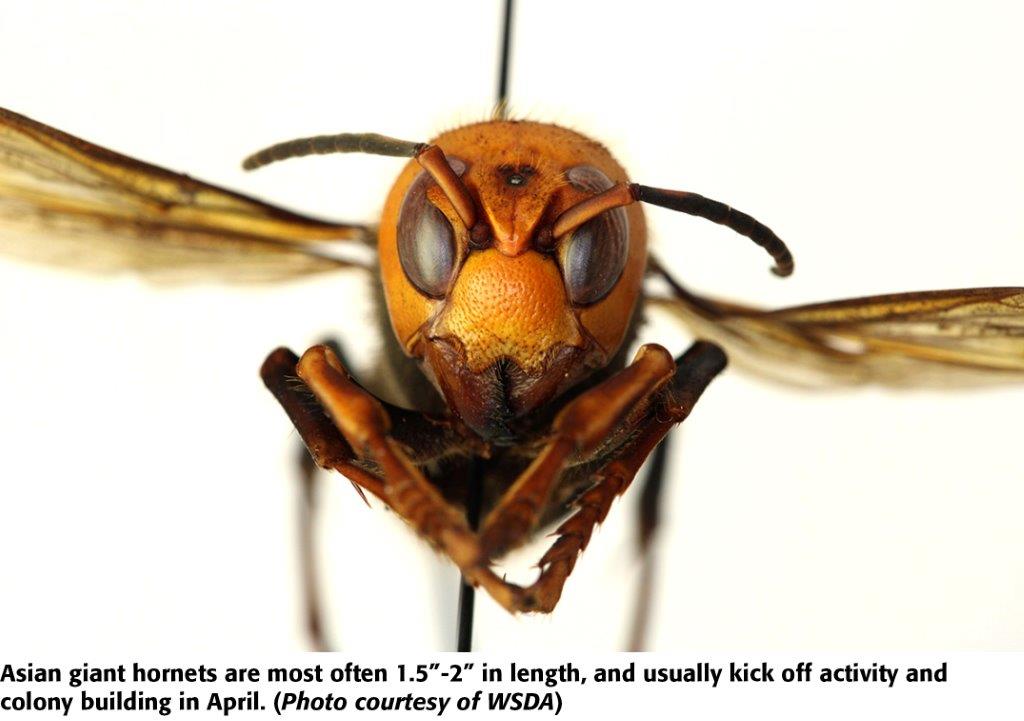 “As a new species entering our state, this is the first drop in the bucket,” Murray adds.

Typically hibernating in winter, Asian giant hornets emerge in spring and form colonies, most often congregating underground in nests hosting hundreds of hornets. The hornets will attack and consume any large insect, but often favor honeybees, decapitating the bees and chewing the thoraxes into a transportable clump, and returning to the colony to feed the “meatball” to larvae. A single nest can produce at least several hundred new queens. 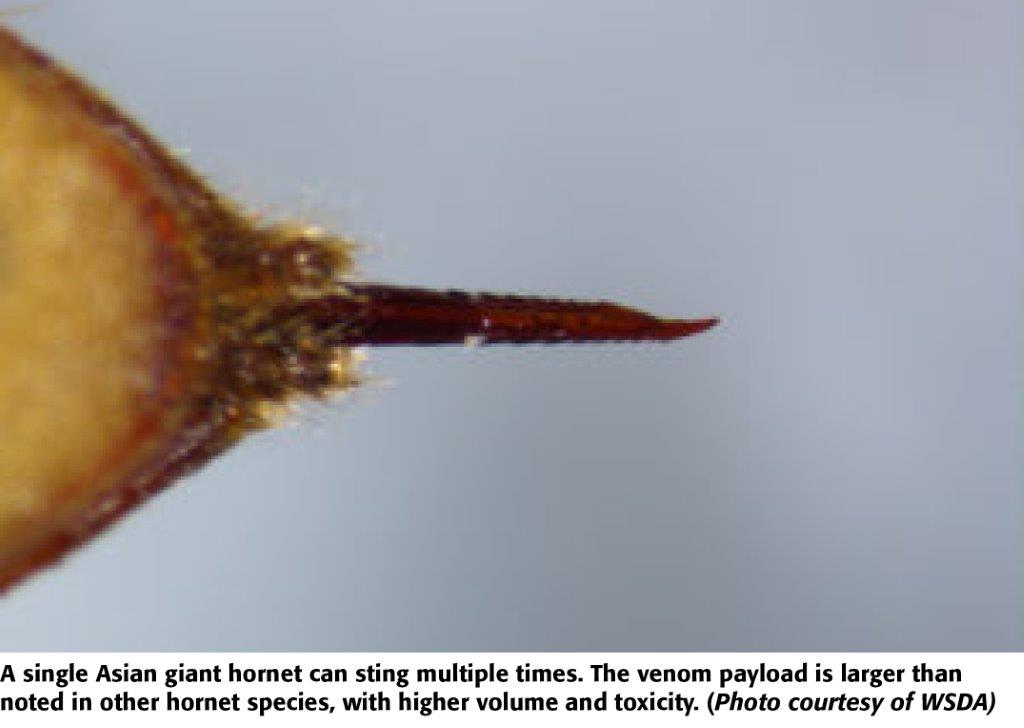 Solo attacks against honeybees are frequent, but as late summer and early fall nears, the attacks turn into concerted team efforts, ending in slaughter of honeybee colonies. Essentially, two dozen hornets (or less) can lay waste to a honeybee hive in a few hours, killing all the worker bees, taking over the hive, and claiming the larvae and pupae as a food source. A single Asian giant hornet can kill at a blistering pace, eliminating several hundred honeybees or more per hour in some cases. The implications for the U.S. honeybee industry are highly significant.

In 2004, Yellow-legged hornet arrived in France, possibly within potted plants imported from China, and has spread quickly across several European countries, reaching Spain in 2010, Belgium in 2011, Germany in 2014, and the United Kingdom in 2016. Expansion rates indicate the Yellow-legged hornet moved across France at a rough rate of 35-50 miles per year.

In a study published by NeoBiota, researchers estimate the Yellow-legged hornet costs of control and nest destruction from 2006-2015 in France at over $25 million. (The data indicates only 30%-40% of detected nests are destroyed each year in France.) “The current study presents only the first estimates of the economic costs resulting from the Asian hornet (Yellow-legged), but definitely more actions need to be taken in order to handle harmful invasive species, one of the greatest threats to biodiversity and ecosystem functioning,” says Franck Courchamp, leader of the research team, and member of the French National Centre for Scientific Research (CNRS).

WSDA Pest Program scientists are intent on trapping and eradicating Asian giant hornet. WSDA is trapping for queens this spring, with crosshairs on Whatcom, Skagit, San Juan, and Island counties. Public assistance in trapping Asian giant hornet is welcomed by WSDA via plastic bottle traps filled with orange juice or rice cooking wine. The public is also encouraged to download the WA Invasives smartphone app for reporting of hornet sightings.

Further, to report an Asian Giant Hornet sighting, contact the Washington State Department of Agriculture Pest Program at 1-800-443-6684 or online at agr.wa.gov/hornets.