Help On The Way For Fluid Milk Sales 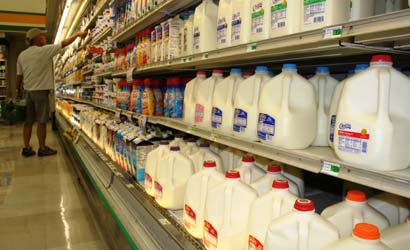 It’s a recurring theme: Fluid milk sales in the United States continue to decline, month after endless month, year after blessed year. Type in "fluid milk sales" into dairytoday.com's search engine, and no fewer than 125 articles pop up.

Very few, if any, report good news. In fact, you have to go all the way back to 2008 to see positive sales gains.

So Gallagher challenged the industry—processors, manufacturers, retailers—to re-think the entire fluid milk category. He wanted the industry to re-consider products, packaging, labeling and marketing to turn sales around. He also believed that partnerships with category leading players could start to turn things around.

DMI’s partnership with Domino’s Pizza in cheese is an excellent model to follow. There, DMI partnered with the pizza retailer to come up with new pizza offerings.

Later this month, at DMI’s annual meeting in Grapevine, Tex., checkoff officials will announce eight new partnerships to boost fluid milk sales. "Not all of the partnerships are with dairy companies," says Alan Reed, executive vice president of strategy, insights and planning. "But all of these new partners see opportunity in the fluid category."

They have real potential. DMI’s on-going partnership with McDonald’s has resulted in 27 new dairy products offered by the fast-food giant. And milk jugs are now the default beverage in McDonald’s kids meals, meaning customers automatically receive milk with the meal unless something else is requested. This effort boosted milk sales 1.7 billion pounds between 2009 and 2011. It is hoped this number will double between 2012 and 2014.

DMI’s partnership with Quaker Oats, which promotes milk rather than water on oatmeal, has boosted milk sales in Safeway and Kroger stores 2 – 6%, says Reed.

Keep in mind that fluid milk at retail is still a $20 billion industry. "White gallons will still be dominant in the dairy case," says Paul Rovey, an Arizona dairy producer and DMI chair. "But white gallon sales are not growing."

So it’s imperative the industry looks to new products, new packaging, new ways to reach consumers. The $500 million in partnerships DMI will announce later this month is an exciting launch to the effort.