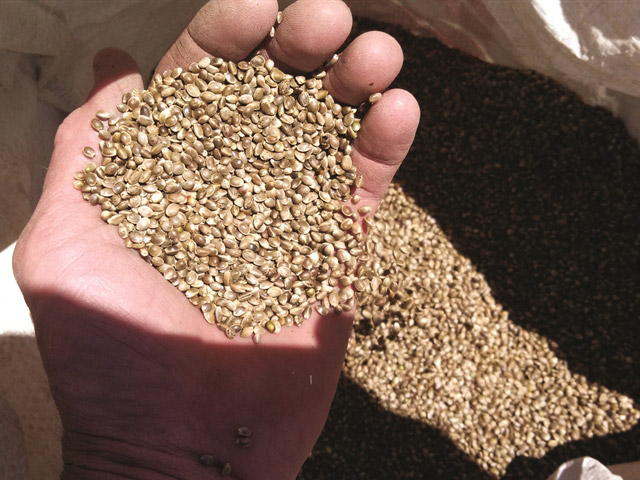 Giles Shell was racing against rain when opportunity climbed the Kentucky hilltop where he and a 12-man crew were setting tobacco. Escorted by his father, Gary, a small cadre of agricultural entrepreneurs from California and Colorado had come to probe possibilities for a crop resurrection. With a benched crew on the clock, Shell sat frustrated at the periphery of the gathering with his arms folded in defiance as the parley began. Shell didn’t find a hemp opportunity in May of 2014; it found him.

While he listened to the western visitors and stared down at empty rows of light brown silty loam, Shell was forced to reckon with the tight margins of tobacco production. Curiosity raged beneath his stubborn exterior and triggered an exhaustive online search for more information. He was hooked by hemp’s potential. With a nod from Gary, Shell took the hemp reins and drove hard, jumping into production in the summer of 2014. Three years later, Shell’s venture is paying dividends for his farm in Garrard County, and he hopes the entire state of Kentucky.

In June 2014, Shell began experimenting with greenhouse propagation and health maintenance of hemp plants sourced from GenCanna Global, a hemp company with the largest processing facility in Kentucky. The company has contracted with six growers to farm hemp exclusively for cannabidiol (CBD)—hemp’s chemical component used for pharmaceutical and nutraceutical purposes.

In 2015, Shell concentrated on field production and planted 40 acres that yielded almost 80,000 lb. of dried industrial hemp. In 2016, he focused on commercially propagating hemp on a large efficient scale, and successfully cloned 200,000 plants in seven days, planting them on 65 acres. He next intends to propagate enough hemp plants to populate 550 acres in 2017.

Greenhouse propagation is necessary because Shell, 32, only allows female plants in the field. Female plants produce flowers, the main source of CBD. In short, there’s no money in males on the CBD side of the hemp industry. The flower houses 17% to 20% of total CBD, but the entire plant contains CBD, making overall yield critical to profit. In 2017, Shell aims for 3,000 lb. per acre of dried hemp in powder form, a sizable jump from 2,000 lb. per acre in 2015.

If Shell was growing hemp exclusively for building products, the male-female issue would be irrelevant. If a hemp belt develops in the U.S., there will be expected industry use variability in operations based on fiber, seed and floral purposes. “We’re trying to commercialize a plant with no genuine documented history,” Shell says.

Industrial hemp is on a slow-burn toward titan crop status and will be the fastest growing segment of agricultural crops during the next 15 years, believes Matty Mangone-Miranda, GenCanna’s president and CEO. “What is hemp’s U.S. future? Just look at the facts,” he says. “It’s used in everything. Right now, CBD gets the press, but there are almost 30,000 industrial products made from hemp.”

Shell’s method of hemp farming doesn’t come with a manual. He mimics commercial vegetable production by planting with a cucumber setter on top of raised beds, and runs drip tape beneath plastic mulching. Annual rye is sown just before hemp planting to curb erosion and control weeds in the 72" middles.

From greenhouse to harvest, the highest input cost is labor—triple all other inputs, Shell estimates. He has learned on the fly for three years, pocketing every management lesson for a crop with no chemical labels. He fertigates through drip tape, although the nitrogen requirement is relatively low. “Forget soil sampling, we’re chasing the sweet spot for nitrogen and still experimenting,” he says. “Water it and keep away the weeds, and hemp can be really hearty.”

There is no standard harvesting equipment for Shell’s style of hemp production. He’s forced to use tree trimming lockers and cut down the whole plant just above the plastic line. Harvested hemp is loaded onto trailers and shipped to GenCanna’s processing facility in Winchester. Once cut, hemp quality deteriorates quickly, so Shell harvests no more than what can be shipped in the same day.

After harvest, Shell rolls up the plastic and comes back in with a drag, usually a railroad tie. He disks the ground and seeds wheat as a cover crop if it’s early enough in the fall or plows and lets winter take control if it’s too late.

The patchwork planting, growing and harvesting techniques are a hallmark of a crop industry in its infancy. Shell is a pioneer on the floral side of hemp production, and his efforts are creating reference points for other producers. “Our main industry goal is not to make bucket loads of money right now,” he says. “We are setting the table for long-term hemp success.”

Due to legal hurdles, U.S. farmers are forced to leave money on the table because hemp industry demand is filled by foreign imports. Green says domestically grown and processed hemp will beat imports in quality and price. “We want a U.S. product to distribute globally and not vice versa. The current setup is not in the interest of our farmers or our country.”

“The foreign market is scared because they know we’re going to create a hemp industry and U.S. hemp can be the gold standard,” Mangone-Miranda echoes. Although CBD use is the merited driver of hemp potential, he says the biggest hemp sectors will develop in building materials, textiles and food. As a multiple-use product, no crop compares with hemp’s footprint, despite playing catch-up in genetics, processing, infrastructure and regulatory navigation.

Once unsure of genuine profit possibility, Shell has consistently fended off interest from fellow farmers. Those days are over, and hesitancy has ceded ground to excitement. “I can now put a production portfolio in front of farmers and let them make up their own minds,” he says. “The potential for hemp profit is very real.”