The Gulf of Mexico hypoxic zone reached a historic 8,776 square miles in 2017. Such zones deprive fish and plants of oxygen due to excessive algal growth.
( NOAA )

National Oceanic and Atmospheric Administration (NOAA) is forecasting the Gulf of Mexico hypoxic “dead” zone to hit 7,829 square miles in 2019. While this isn’t a new record, it’s significantly larger than the 5,770 square mile 5-year average.

Dead zones are created when upstream nutrients such as nitrogen and phosphorus get into rivers and creeks, causing excessive algae growth that doesn’t allow oxygen to get beneath the surface. When this happens, fish and other animals die. In addition, the water is unsafe for human consumption.

This year’s large dead zone is partially due to higher-than-average rainfall in much of the Mississippi River watershed that lead to high river flows and larger nutrient loading into the Gulf. For example, in May discharge from the Mississippi and Atchafalaya rivers was 67% above the long-term average over about 40 years. 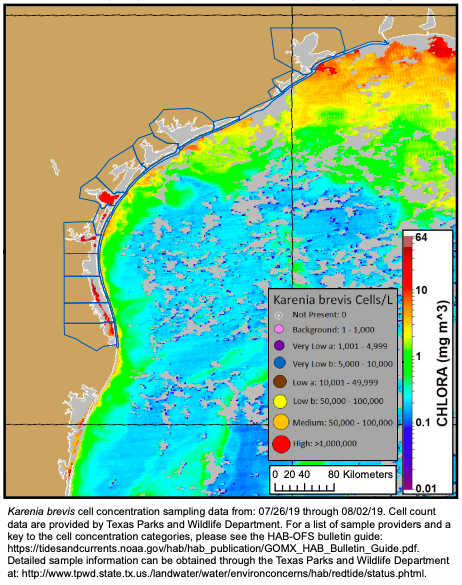 Because of the damage dead zones cause to wildlife and recreation, the Mississippi River/Gulf of Mexico Watershed Nutrient Task Force was created. The goal? Reduce the dead zone’s 5-year average to 1,900 square miles. The task force brings together stakeholders from 12 states.

However, thus far their goal has remained unmet.

“Long-term monitoring of the country’s streams and rivers by the USGS has shown that while nitrogen loading into some other coastal estuaries has been decreasing, that is not the case in the Gulf of Mexico,” said Don Cline, associate director for the USGS Water Resources mission Area in a recent news release. “USGS Monitoring and real-time sensors, coupled with watershed modeling, will continue to improve our understanding of the causes of these changes and the role they play in the Gulf and other coastal areas.”

Monitoring by the numbers:

This is the second year USGS has independently monitored these watersheds.