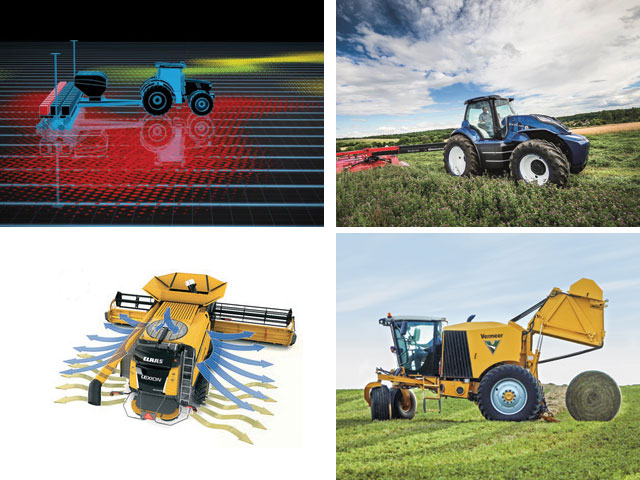 There’s a lot riding on farm machinery. These days, manufacturers are focusing their efforts on design, capability, ease of operation, autonomy and data collection. In recent weeks, three concept innovations, a planter attachment, tractor and baler, and a harvesting system have been shaking up the industry. Not that long ago, these innovations were nothing more than a mere idea. Today, they’re proving just how far farm machinery can push the envelope for the sake of productivity and sustainability for farmers in the U.S.

AMVAC is working on new technology to help farmers optimize nutrient and chemical applications at planting.

“We want to help everyone become a better steward with Smart Cartridge,” says Rick Rice, AMVAC director of application technology. The product attaches to the planter and uses zones to apply fungicides, nutrients and other chemicals with precision to meet the needs of each zone. The company says this could save farmers money on chemicals by applying just what’s needed.

“Where farmers have standing water they might need to add extra fungicide, but in other areas of the field the going rate might be enough. The same with nematodes,” Rice says.

The Smart Cartridge combines field samples, yield data and soil data to create management zones. AMVAC plans to test the product on a limited number of acres in 2019 with a full commercial launch in 2020.

New Holland has a new midsized tractor in its lineup that runs on methane (a form of natural gas) or compressed natural gas (CNG). Incorporated into a T6 tractor body, the in-line six-cylinder methane engine has an electronic stoichiometric multi-point injection system to produce up to 180 peak horsepower and 545.8 ft.-lb. of torque. It will run all day on a single fill-up, which can be accomplished as quickly as filling a tank of diesel.

The concept tractor will do all the work of a diesel-powered T6 with up to 80% less total emissions, says Sean Lennon, New Holland global tractor manager.

If you use homegrown crops to make methane, there will be “virtually zero total emissions” from this tractor. Another advantage: it is quiet, making 50% less noise than a similar diesel tractor.

When you are trying to sell a revolution, looks are important. So New Holland hired designer David Wilkie, who came from an automotive background where he worked on Lamborghini, Maserati and Porsche vehicles. The result is a sleek tractor with unexpected curves but a functional nature.

“There has been great technology developed to manage zones in planting, application and irrigation, but harvesting has not kept up,” says Brandon Olstad, platform manager for Claas of America. “The concept is the same as other variable-rate technologies that are changing operational practices of equipment, minimizing or controlling inputs and maximizing outputs.”

VRH technology in a Lexion combine includes the following:

A First Look at a Self-Propelled Concept Baler

“This machine provides a lot of advantages, and it’s an easier way to bale hay,” says Josh Vrieze, Vermeer product manager. “It’s a product of our Forage Innovations Group, which is a separate R&D group focused to work on things that don’t exist today. This group has three concepts, and this is the first we’ve shared publicly.”

The prototype ZR5 balers have been in testing for two years, primarily around the company’s headquarters in Pella, Iowa, and more recently in Nebraska.

“Vermeer has quite a bit of experience with hydrostatic equipment in other divisions,” Vrieze says. “For this machine, being able to control the power unit makes the baler much more efficient. When a bale is ready to be tied, all the operator really has to do is push a green button, and the machine finishes the bale, ejects it, closes the tailgate and continues on.”

Integrated quarter-turn technology is part of the ZR5 baling automation process. During the tie-cycle, the machine can automatically rotate to the left or right, positioning the bale parallel to the windrow upon ejection. When placing bales parallel to the windrow, the picking up process can be completed up to 35% faster.

The prototype is powered by a 173-hp Cummins engine and features a Claas cab. Patent-pending suspension technology handles the bumps and jostling when baling hay. Inspired by the lawn care industry, the machine is built with a zero-radius steering system.

The ZR5 produces 6' tall x 5' wide round bales and is targeted for owners of multiple balers—those putting up at least 5,000 bales per year.