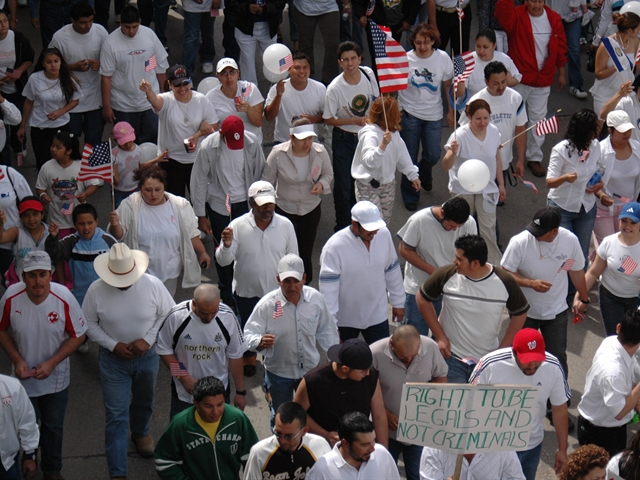 House Republicans voted to try to block President Barack Obama from easing the deportation of millions of undocumented immigrants, including those brought to the U.S. illegally as children.

The 236-191 vote today goes beyond Republicans’ pledge to reverse the president’s November orders shielding about 5 million people in the U.S. from deportation.

The measure also seeks to block a 2012 Obama directive addressing young undocumented immigrants and a series of memos starting in 2011 that said terrorists and criminals should be deported first. House Speaker John Boehner and other leaders agreed to include those measures, which were sought by Tea Party-aligned members.

Boehner said during floor debate that Obama’s actions were “not a good-faith attempt at immigration reform.”

“We are dealing with a president who has ignored the people, ignored the Constitution, and even his own past statements,” said Boehner, maintaining Obama had said at least 22 times he didn’t have the authority to take such actions.

The vote is the start of negotiations with the Senate over funding for the Department of Homeland Security, which expires at the end of February. Even Boehner allies say the broader measure has little chance of success because Senate Democrats are unlikely to support it and Obama would veto it.

“There’s going to have to be an element of bipartisanship someplace to get anything done,” said Oklahoma Representative Tom Cole, a Republican and an ally of Boehner. “At least the initial positioning of bargaining will be what we want.”

Senate Minority Leader Harry Reid, a Nevada Democrat, said in an e-mailed statement that the bill won’t pass in his chamber. House Republicans are “picking an unnecessary political fight that risks shutting down the Department of Homeland Security and endangering our security,” he said.

Two Democrats, Brad Ashford of Nebraska and Collin Peterson of Minnesota, voted with 234 Republicans for the bill, while 10 Republicans voted with 181 Democrats against it.

One Republican who opposed the measure, Mario Diaz-Balart of Florida, said in an interview, “this is not going to happen” because it wouldn’t survive an Obama veto.

“Does it buy us space or does it just bring up people’s expectations to where it’s just going to make them more angry,” when it fails, Diaz-Balart said.

Boehner has said he would use his expanded majority to unravel the president’s actions. Republicans passed only a short-term funding bill in December for the Homeland Security Department, which oversees immigration, intending to force a confrontation this year over Obama’s orders.

The top Democrat on the House Appropriations Committee, Representative Nita Lowey of New York, said the Republicans’ plan would “hurt those who were brought here as children.”

“If you don’t agree with the president’s enforcement actions,” Lowey said, “then let us have a serious debate about comprehensive immigration reform.”

The $39.7 billion bill would fund the department from the end of February through the end of the fiscal year on Sept. 30 and would provide a $400 million increase over the previous fiscal year.

Senate Majority Leader Mitch McConnell of Kentucky would need support from at least six Democrats to gain 60 votes to advance the measure. That’s unlikely because one of the conservative Democrats, Heidi Heitkamp of North Dakota, has affirmed that she favors a broad immigration bill that would allow many undocumented immigrants to stay in the U.S.

The move is also an attempt to shore up support among Republicans to proceed to a broader overhaul of U.S. immigration laws. House Homeland Security Committee Chairman Mike McCaul of Texas is drafting a border-security bill that Republicans plan to use as a vehicle to advance immigration priorities including an expansion of high-tech worker visas.

Boehner is trying to neutralize the politically challenging issue for his party in the 2016 elections. Mitt Romney, the 2012 Republican presidential candidate, lost to Obama after capturing just 27 percent of the Hispanic vote. That has made Republican leaders nervous about legislation that could further estrange them from Latino voters.

At the same time, many Republican-led state legislatures redrew their congressional districts in 2010, making them less ethnically diverse and putting the legislative priorities of many individual House Republicans at odds with the national party’s political goals.

Obama’s executive actions defers for three years deportation of people who came to the U.S. as children and for parents of children who are citizens or legal permanent residents. The changes wouldn’t give these people, primarily from Mexico and Central America, an easier path to citizenship.

In announcing his decision on Nov. 20, Obama said he had the authority to redirect the nation’s immigration enforcement apparatus to target “actual threats to our security: Felons, not families.”

Today’s legislation, H.R. 240, would seek to undercut the president’s orders by putting Congress in charge of funding the agency that oversees immigration applications. The idea is to deny the administration the funds it needs to carry out its orders.

House members adopted language drafted by Representatives Bob Aderholt of Alabama and Mick Mulvaney of South Carolina saying that money provided in the bill, or fees collected by the agency, can’t be used to grant work authorizations to undocumented immigrants or provide other benefits.

Senator Ted Cruz of Texas, who had urged House Republicans to block Obama’s immigration orders in the strongest possible terms, praised the House vote and said the Senate needs to preserve those provisions.

Cruz infuriated fellow Republicans in December by keeping the Senate in Washington for a Saturday session on Dec. 13 so he could protest members’ decision not to immediately seek to block Obama’s immigration orders.