Southern states and the core of the Corn Belt will see the largest payments with MFP 2.0, but just how those payments were calculated remains a mystery.
( MGN )

As trade issues continue to weigh on agricultural commodities, USDA rolled out details surrounding the second year of market facilitation program (MFP) payments. Sign-ups begin this week, with some farmers seeing payments better than last year, while others are questioning just how the payments were calculated for 2019.

The map from Agricultural Economic Insights shows which producers will see the largest payments. It shows the heaviest amounts in southern states, with larger payments also in the core of the Corn Belt. 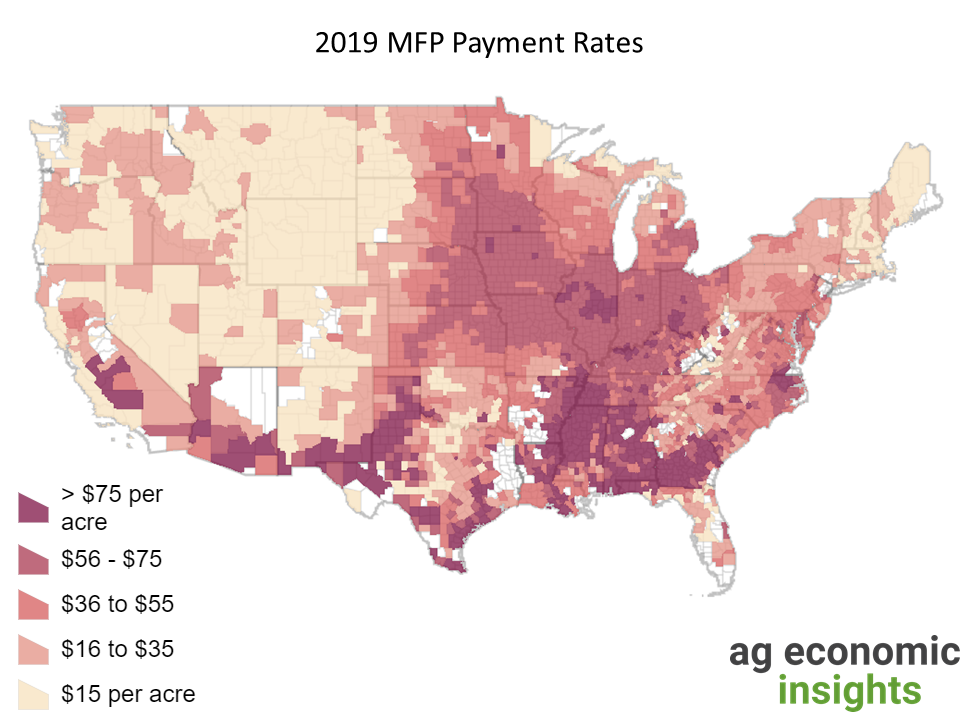 Farm Journal Washington Correspondent Jim Wiesemeyer said the 2019 program is better for corn producers, as the payment is a flat rate per acre instead of per-crop like farmers saw in 2018. However, disparities remain, with some counties seeing larger payments than others.

“Agriculture Secretary Sonny Perdue wanted to come up with a program that you wouldn't have so much disparity between the counties like you had on MFP 1,” he said. “I think they went the most equitable way knowing that there would be disparities between counties. For example, McLean County is at $82 in Illinois and Blackhawk County, Iowa, is a $65 per-acre payment. Why the spread there?”

Just how did USDA calculate the MFP payments in 2019? That remains a mystery, as that’s a detail the agency didn’t provide.

“What we're going to try to find out is what was the formula that they used to come up with these per-county payment rates,” said Wiesemeyer. “I think that's very intriguing that they left this as a black box area, but trust me, we're going to find out that formula and will deliver the news.”

David Widmar of Agricultural Economic Insights said even though the formula of the payments is still unknown, he thinks the agency relied heavily on similar guiding principles from the 2018 payments.

“USDA did not release the exact metrics, but if we think about that farm-level formula we had last year—production multiplied by a payment rate—something similar happened at the county level this year,” he said. “They went back like they did 2018 and said, 'how much were soybeans impacted on a per-bushel basis, or corn on a per-bushel basis, or cotton on a per-pound basis?’ They looked at yield in that county and looked at historic production, and they kind of threw it all together and created a weighted average payment rate for each county.”

“What we have seen is that this MFP round of funding, similar to last year, was heavily influenced by the heavy hand of soybeans and cotton; they're both the big impacts,” said Widmar. “We saw big per-acre payments for cotton last year; it just didn't translate very well through the releases from the USDA.”

Why are several southern states seeing larger payments than counties in North Dakota, also heavily hurt by the trade war? Widmar said that’s based on the amount of cotton grown in those areas, as cotton is a high-revenue crop requiring more inputs to grow.

“I assume USDA went back as they did last year and said, ‘Okay, what commodities would have been feeling the impacts of this trade war?’ Cotton and soybeans have been heavily dependent on trade with China, so those are going to be crops that have been in the crosshairs of the tariffs,” he explains. “That’s exactly what we’ve seen reflected in the payment rates.”

Widmar said while USDA used a similar theory, the math behind this year’s payment are different.

“Last year was bushels each farm raised; this year was sort of this county weighted production level,” said Widmar. “I think a lot of this gets back into WTO, and how all this fits into how the money can be spent and how the money is interpreted with our World Trade Organization agreements.”