How it Works: Sex Sorted Semen 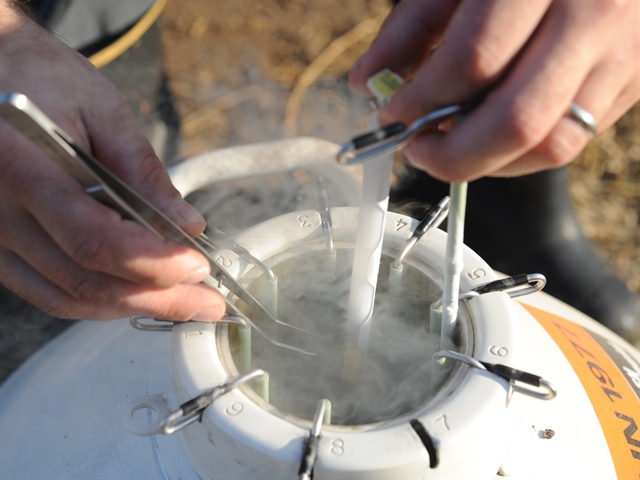 Of the several attempts to find ways to sort XX and XY sperm cells, the only method proven to be commercially viable is flow cytometry. Before going through the flow cytometer (sorting machine), a fluorescent dye is incorporated into the DNA of the sperm cells. They pass through the sorting machine in drops of liquid containing a single sperm cell per droplet. The machine detects the amount of florescence each cell emits; an XX sperm cell will have more florescence than an XY. A positive or negative charge is applied to the droplet depending on the type of sperm cell in it. Then, the machine can sort them into different collection tubes, based on the charge on the droplet, as it moves through a magnetic field.

Initially, flow cytometry yielded very low conception rates when sex sorted semen was used fresh soon after processing. Work in the laboratory and field studies eventually improved the results until sexed semen became commercially available on a large scale in the United States in 2004. The sorting method has continually been improved over the last 10 years and yields better fertility than when commercial use began.

The advantage of shifting sex ratio has been most obvious for dairy producers where male claves generally have little value. Beef cattle producers have been able to use both XX and XY sorted sperm in different scenarios. Seedstock producers are able to increase the number of bulls they market each year and target specific females to produce replacement heifers. Commercial producers have been able to increase the number of steers giving them more total weight, and usually more valuable weight, to sell. Similar to the purebred scenario, commercial producers can select specific cows to target replacement heifer production. All of these situations have to be evaluated with the disadvantages outlined below in mind. Specifically, the production benefits do not always outweigh the additional input (both increased cost and reduced fertility).

This sorting method is not perfect, but it does shift the ratio 85 to 95 percent of the desired sex. Very recent improvements are being reported with fertility using sex sorted semen. However, it continues to be considered lower fertility than non-sorted frozen semen. It takes much longer to process sex sorted semen than conventionally processed semen. Therefore, it yields fewer straws per ejaculate with fewer cells per straw and reduced fertility. Additionally, individual bulls inherently have different fertility and this difference can be exacerbated during the sorting process.

Sex-sorted semen is currently reserved for use in herds where whole-herd reproductive efficiency has been optimized through intense reproductive management. Until recently, pregnancy rates to sexed semen have been considered highest in virgin heifers that are bred 12 hours after the beginning of standing heat. But, the early data that led to those general recommendations came from the dairy industry and recent research shows that difference is not as dramatic between beef cows and heifers.

Fix-time insemination (appointment breeding) with sex sorted semen does not currently yield consistently adequate fertility. There continues to be a great deal of research to find the right estrus synchronization protocols and timing of insemination to reach pregnancy rates comparable to fix-time AI with conventionally frozen semen. That will continue to be the major limiting factor to widespread use of gender sorted semen in commercial cow-calf production. With continued improvements being made to the sorting process, finding protocols that yield consistently good results could soon be a reality.

Use of In vitro fertilization has dramatically increased in the United States over the last three years. However, using frozen sex sorted semen in this process decreases the number of transferable embryos form a single IVF procedure. Some labs are successfully producing IVF embryos by sorting conventionally frozen semen (reverse sorted) just prior to incubating it with harvested oocytes (eggs).

For producers that currently use artificial insemination and successfully manage reproduction, sex sorted semen is a technology that can be very useful. Again, with rapid improvements in fertility, it is worth considering is several situations.