How Likely Is an Economic Recession?

Want to measure the liklihood of an economic recession? Watch the yield on the 10-year U.S. treasury bond.
( AgWeb )

“It will tell you about global risk and inflation,” he says. “When inflation ticks up, that yield will move up; but when risks escalate, the yield falls. If it comes down dramatically, it is a warning that global economic tensions are mounting.”

When you have global tensions, Goss says, investors look for a safe haven for their money, and most view the 10-year treasury bond as one of those safe havens. 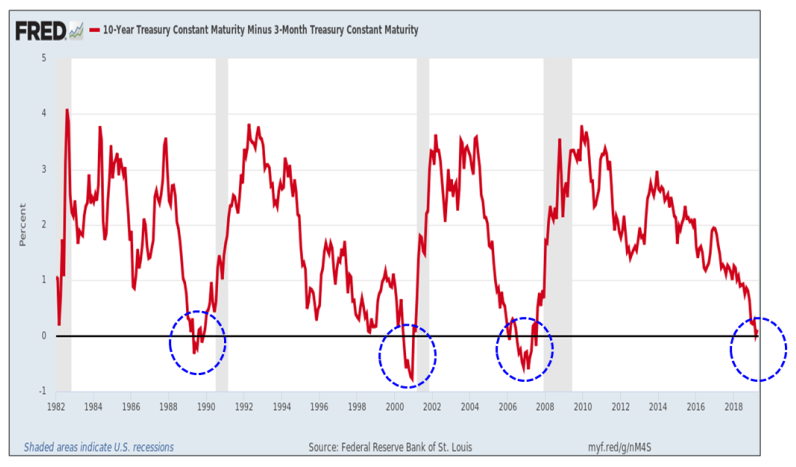 “This graph also shows the yield on the benchmark 10-year Treasury note fell below the rate on the three-month Treasury bill in late March for the first time since July 2007,” Penson says.

“Recent inverted yield curves have been influenced by tightening monetary policy used to combat inflation, which makes money expensive,” he says. “That is not seemingly the case this time as the Federal Reserve has been accomodative in 2019 as inflation is less than 2%.”

“The economy grew 3.2% the first quarter of 2019 and is expected to grow around 3% the second quarter,” he says. “These are more plausible indicators that the likelihood of a recession, assuming continued Fed accomodative policy, is unlikely this year.”

Danny Klinefelter and John Penson provide monthly commentary on micro and macro topics issues confronting commercial agricultural producers and agricultural lenders. You can learn more and subscribe at GrayHairPerspectives.com. The article above is based on a recent article.

The Man Behind the Rural Mainstreet Index