How Resurrection Plants Could Lead to More Drought-Tolerant Crops 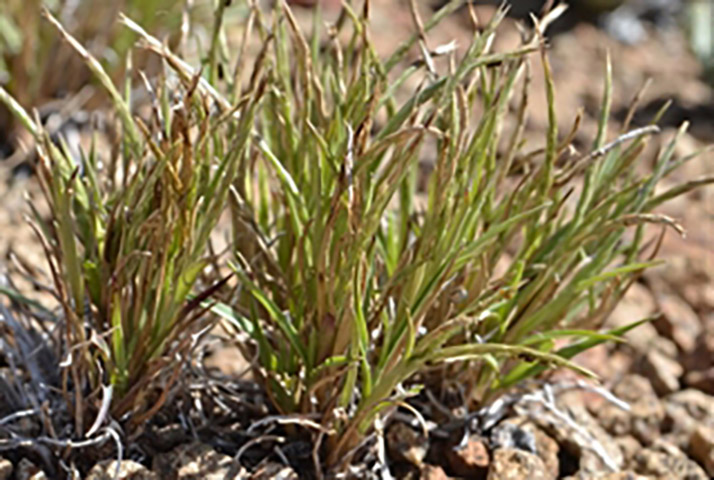 A Lazarus heart beats inside an obscure grass. Rip it from the soil; throw it on the counter; walk away; let it dry out and turn brittle. Looks dead and should be dead. But splash on a bit of water and life comes forth: plant resurrection.

Recent genome sequencing of Oropetium grass has given researchers a blueprint in distinguishing genes related to phenomenal plant resilience. The bizarre self-preservation abilities of resurrection plants like Oropetium hold tremendous promise toward engineering stronger drought-tolerance in crops, and the effects soon could reach farmland.

Scientists at the Donald Danforth Plant Science Center submitted an Oropetium sequencing proposal to Pacific Biosciences’ “Most Interesting Genome in the World” grant program. The genome sequencing results are the first steps toward mapping the resurrection trait. “This discovery is related to all crops in agriculture,” says Robert VanBuren, NSF postdoctoral scientist, Danforth Center. Plants use similar pathways during seed drying. The capacity to perform resurrection may be a matter of changing around how the genes are regulated.”

Oropetium endures harsh, rocky terrain in Africa and India. When lacking water, it shows extreme tolerance. The hearty characteristic is similar to dessication when seeds dry out and remain dormant yet viable for years. The embryo stays alive and can germinate. Essentially, add water and the fuse is lit.

It’s a remarkable trait, but an elusive one lacking in crop grasses. During dry periods, Oropetium locks up and protects its DNA and RNA. “It’s sort of like putting antifreeze in your vehicle to protect it from extremes,” says VanBuren. “This is an understudied phenomena as a seriously promising path for crop improvement.”

VanBuren isn’t seeking extreme dormancy in crops, but rather better endurance under stress. “We want to boost crops in periods where they would normally lose production. Essentially, we’re looking for better performance in crops, not resurrection.”

The genome sequencing effort was performed with PacBio’s SMRT (Single Molecule, Real-Time) technology. With SMRT Sequencing, genome sizes such as Oropetium can be sequenced in two days, and only a matter of weeks for larger plant genomes like corn.

With these falling costs and technological leaps, breeding programs have gained unprecedented access to genome sequencing. Industry-leading ag companies recognize the need to overcome genetic bottlenecks in major crops. Narrow gene pools leave crops highly exposed to pest pressure, disease, and weather extremes, according to Jonas Korlach, chief scientific officer, PacBio. “After centuries of breeding, genetic diversity has decreased, partly through the pursuit of yield. The agriculture industry wants to get it back. With this technology, we can think about sequencing multiple strains of a particular crop and wild varieties,”Korlach says. “The gene pool holds so many answers for the challenges faced in agriculture.”

Every genome tells a story. The genome and the genes within explain the adaptation of an organism, which are the nuts and bolts of survival and prosperity. Oropetium has amazing drought-tolerance and the genetic basis for its stamina is hiding inside the genome. “We will identify Oropetium genes that confer the ability to withstand drought,” says Todd Mockler, associate member, Danforth Center. “We’ll do it in a research context, but an agbiotech or seed company will deploy it in a commercial context.”

Whether through GMO tech, computational breeding, advanced genome editing, RNAi or another technology, the door to transfer resurrection genes into plant crops is opening. Mockler’s goal is to make heartier crops which stand tough against drought. “We want to improve drought tolerance and water use efficiency. During extreme weather years, farmers would still get some yield.” In addition, Mockler says Oropetium genes can be manipulated to provide benefits during standard weather years. “In a normal year, plants still get all sorts of daily stress. We want discoveries from sequencing the Oropetium genome to boost yield stability in the field during those normal years.”

Oropetium’s Lazarus heart is enabling a marriage of resurrection plants and field crops. VanBuren and Mockler will next test genes related to resurrection properties by placing them in model plants. “When we see boosted drought-tolerance, we’ll be ready to insert the genes into crops,” says VanBuren.