How to Budget for $4 Corn

University of Illinois ag economist Gary Schnitkey has been tracking net incomes for farmers. They’re tracking low in 2015, and to avoid a repeat in 2016, it’s a simple-enough equation – one of two things has to happen, he says.

“Commodity prices must increase, or costs must decrease,” he says. “At this point, counting on price increases seems imprudent. As a result, substantial cost cuts will need to occur to have positive incomes in 2016.”

Specifically, Schnitkey looked at how farmers could trim $100 per acre for their 2016 budgets. If farmers in his state could accomplish this, he says $100 per acre cuts could net $19 per acre of net farmer income. He admits this is not an easy prospect.

“Obviously, large cuts in costs will be difficult,” he says. “However, profitability in 2016 likely depends on making these cost cuts.”

Where cost cuts ultimately occur is an open-ended question, Schnitkey says. But if cuts are possible in the following areas, he suggests pursuing them. Here’s an example, looking at central Illinois farmland with lower productivity. 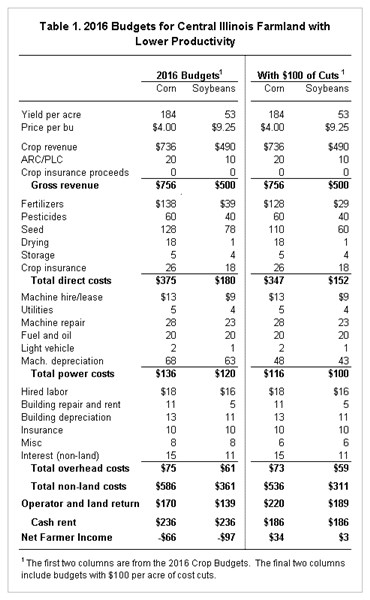 Schnitkey notes that fertilizers, seed and machinery depreciation accounted for 71% of all cost increases between 2006 and 2013.

“These three costs plus pesticide costs account for 67% of non-land costs for corn and 61% for soybeans,” he says. “Costs in these four areas must occur if sizable reductions in non-land costs are to occur.”

For more budget analysis (including for soybean), visit http://farmdocdaily.illinois.edu/2015/08/cost-cutting-for-2016-budgeting-for-corn-soybeans.html.