How High Can Corn Go?

Although spring corn futures are in the $6 range, it still seems a far stretch to imagine a jump to $11 a bushel in the next few months. But some commodity traders are protecting themselves against the very possibility by purchasing corn call options with strike prices (the price at which the call option can be exercised) of $11 a bushel.

Now the question is whether global market conditions are coming together to create the "perfect storm." Rising grain and feed prices, tightening global supplies and increases in export demand signal that a storm is brewing, but what is the likelihood of prices climbing that high?

Jeff Hainline, president of Advance Trading in Illinois, says: "Now, volatility is extremely high, so options are very expensive. People want to have security against an unknown."

When buyers purchase options that much out of the money—meaning they’re less likely to pay off—it is extremely cheap, he says.

The $11 calls effectively provide buyers with a cheap insurance policy against the risk of a long-tail exposure—or the risk that corn prices will rise that high. "It would seem a rather difficult dynamic to reach because we would need to have nearly a doubling of prices to get to $11," Hainline says.

With exports increasing and global production shrinking, prices will likely continue to increase. The question that commodity traders—and the ag industry as a whole—are trying to figure out is how much that price will rise.

Lightning strikes twice. This past fall, USDA’s global output update said global corn production would be 4% lower in 2010 than projected in its August forecast. A frenzy erupted on the Chicago Board of Trade. Prices soared by 6% in one day, which triggered price increase limits and halted trading. The same thing happened a few days later when corn prices rose by 8.5%—the first time that had happened in 37 years.

Allen Baker, ag economist at USDA–Economic Research Service, said in a recent feed grain market
update: "Corn production is forecast to be 496 million bushels lower as a 258,000-acre increase in harvested area is more than offset by a 6.7-bu.-per-acre reduction in yield."

With a USDA export forecast at the end of November citing record-setting ag exports for the coming year, it is hardly a surprise that grain and feed prices are still rising, or that traders are looking to protect themselves with $10 and $11 spring corn calls.

The USDA report projects total ag exports for 2011 to hit $126.5 billion—an increase of $17.8 billion from 2010. Much of the jump in exports is being driven by rising demand and prices for grain and feed.

Projections put exports in grain and feed at $35.4 billion, with corn exports accounting for $12.3 billion of that figure at a projected price of more than $6 a bushel. Corn demand will also profit from rising meat and livestock exports, with USDA projections of $17.3 billion in beef, pork, dairy and poultry exports in 2011.

Imports in China will account for much of the increased demand. USDA predicts that China will become the second largest importer of U.S. ag products, after Canada. Chinese markets are expected to take in $2.5 billion in U.S. farm products. Mexico, Japan, Europe and South Korea will also account for a significant portion of U.S. ag exports this year.

For corn growers, this is good news. The National Corn Growers Association’s chairman for trade policy and biotechnology, Chad Blindauer, notes: "We are always working on building new markets, here and abroad, for U.S. corn." 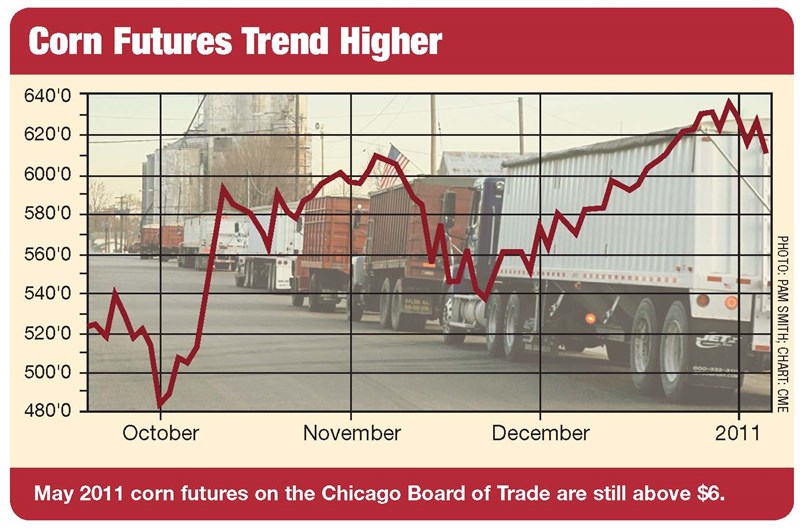