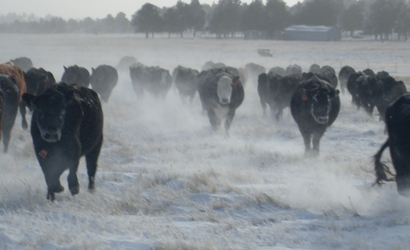 Cattlemen in North and South Dakota have been busy apply for federal aid that is helping cover losses from last fall's blizzard.
By: Blake Nicholson, Associated Press

About one-third of the initial applications made to a federal aid program for disaster-stricken ranchers have come from the Dakotas, and most of the money given out so far has gone to South Dakota producers.

South Dakota ranchers lost an estimated 43,000 cattle and other livestock in a blizzard last October that struck early and with surprising ferocity. More than 1,000 animals died in southwestern North Dakota.

The Livestock Indemnity Program authorized by the new federal farm bill started taking applications April 15. As of May 1, there were 1,034 applications nationwide, with 326 from South Dakota and 32 from North Dakota, according to the U.S. Department of Agriculture. About $343,000 had been disbursed to ranchers across the country — with 85 percent of the money going to South Dakota ranchers. The applications from North Dakota were still being processed.

South Dakota Stockgrowers Association Executive Director Silvia Christen said she is glad ranchers are quickly taking advantage of the program but that "those numbers paint a difficult picture for our industry."

An industry-led relief fund raised $5.4 million for South Dakota ranchers affected by the storm while they waited for Congress to complete work on the farm bill, which President Barack Obama signed into law Feb. 7. The fund handled applications from about 600 ranchers. Christen said she expects the number who apply for aid from the federal government to be even higher because some ranchers didn't apply to the relief fund, thinking others were more in need of immediate help.

"I also assume the number of (livestock) losses will be higher," she said, since the estimate 43,000 animal deaths was based on applications to the private Rancher Relief Fund.

"The devastating storm was intense — catastrophic for some — but in a relatively concentrated area in our state," she said.

Ellingson said she expects more North Dakota applications to be submitted to the federal aid program, especially since there were some winter storms earlier last year that were hard on calf crops.

The Livestock Indemnity Program can cover as much as two-thirds of a rancher's loss. Signup continues through next January.