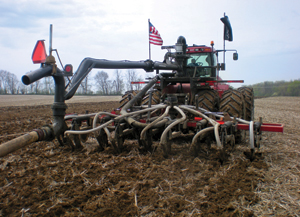 A state rule-making panel has given its preliminary approval to Indiana's first regulations governing big stand-alone ponds and lagoons built to hold manure trucked in from livestock farms.

The Environmental Rules Board gave initial approval Wednesday to the rules for so-called "satellite" manure lagoons after environmentalists told the panel the regulations aren't tough enough.

Some environmentalists fear the rules will turn Indiana into a dumping ground for out-of-state manure. The rules largely mirror Indiana's existing regulations for manure lagoons on large livestock farms.

Board chairwoman Beverly Gard says the panel is expected to tweak the rules in response to some of the environmentalists' concerns before giving them its final approval.