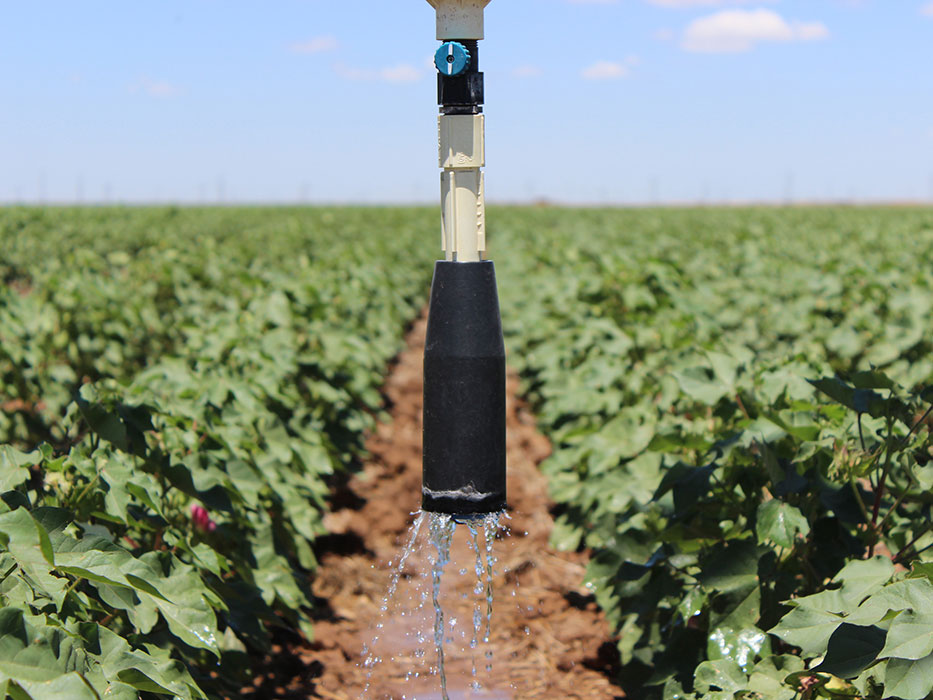 New irrigation technologies are helping farmers make the best use of every drop of water.
( Texas Alliance for Water Conservation )

With water levels in the Ogallala Aquifer declining, farmers in western Texas are working to squeeze the most production out of every drop of irrigation water they apply to their fields. With that goal in mind, the Texas Alliance for Water Conservation (TAWC), a partnership between producers, industry and Texas Tech University, has engaged in a series of on-farm trials since 2004.

Glen Schur, a farmer from the Texas Panhandle and chairman of the TAWC producer board, recently discussed the results of several comparisons of irrigation technology. In an initial three-year trial in 2011, 2012 and 2013, researchers compared results of using low energy spray application (LESA) with low energy precision application (LEPA) on 80" centers on cotton crops under the same pivot.

In this trial, with both designs delivering the same water volume, the LEPA system provided better water penetration, higher yields and net returns more than double those from the broadcast LESA application each of the three years. The cotton crop under the LEPA application yielded net returns of $177, $184 and $184 per acre each of the three years. Net returns under LESA were $60, $37 and $72.

Researchers then followed up with a comparison of LEPA (on 40" and 80" centers), low drift nozzles (LDN), precision mobile drip irrigation (PMDI) and LESA (broadcast spray from 80" centers). The researchers installed each of the systems on a single pivot on a flat field with uniform soil types and calibrated them for identical water output.

This test tracked production of a sorghum crop and a cotton crop under the same pivot during 2016. Using drones and AquaSpy probes, the researchers evaluated coverage, water penetration and dispersal through the root zones for each system. At each probe location, the team used one AquaSpy probe on the top of the furrow, one on the bottom and one midway between to track water movement within the soil profile. Each 48" probe uses 12 sensors to measure soil moisture at 4" depth intervals.

David Sloane, AquaSpy agronomist, says data from the probes illustrates considerable differences between irrigation systems in terms of water dispersal within the plant root zones. “You need to know where the roots are and where your water is going,” he adds.

In this trial, the LEPA system on 80" centers provided deeper infiltration than LEPA on 40" centers and good lateral movement through the soil. Sloane says the field had been managed under a strip-till system, leaving old root channels to facilitate water movement between rows.

For the cotton crop, the results were somewhat different, with the LESA application producing the highest yield at 1,500 lb. per acre. PDMI at 1,420 lb. followed, then LEPA on 40" centers, LEPA on 80" centers and LDN on 80" centers.