It Is What It Is

Nearly every day now I swear I hear about 10 people utter the phrase, "It is what it is." I’m guilty of falling back on it myself, too often for my liking.

I’m working on lessening my cliché dependency, but I must admit, the silly phrase does capture very well the essence of what I’ve been doing these past 21 years: compiling auction sale price data.

At auction, when machinery is on the block, the bids come in, the gavel falls and that’s it. The deal is done. Do you think that piece of equipment sold too high? Maybe you think it sold too low? You can argue and argue all you want until you’re blue in the face.

All I know is the dollar amount it sold for when the gavel fell. The final sale price, to put it simply, is what it is. That said, even though the conclusion seems simple, there is a lot to learn by digging through the data.

One after another. In July, I began to notice farm auction sale prices on nice condition used equipment shoot higher, especially on tractors five years old to 35 years old. Check out these sales that happened within just one week of each other and how my conclusion applies across tractor brands and two decades of models.

Older but worth more money. From my data, I’ve gleaned that it’s just a plain and simple fact that the value of nice condition used tractors in the past few years are continuing to rise. Don’t believe me? Check out the accompanying table of auction prices I’ve seen on MFWD John Deere 8300 Series tractors over the past decade.

These are presented as a walk back through time, starting with sale price data from this year and at least three examples from each calendar year back through 2001. For each year, I’ve reported the three very nicest 8300s sold.

I think the table shows that as this tractor model has aged, it has brought increased demand from buyers and more attention when one is up for auction. Notice how the higher-hour 8300s sold for more money this year than lower-hour and younger 8300s went for five, seven, 10 years ago.
Narrowing the view a bit, let’s look at the period from January 2001 through November 2007. In that time, do you know how many John Deere 8300s I saw sell for $80,000 or more at auction? Three.

That’s an 18.8% increase in value for these tractors despite being nine years older. That’s pretty amazing. 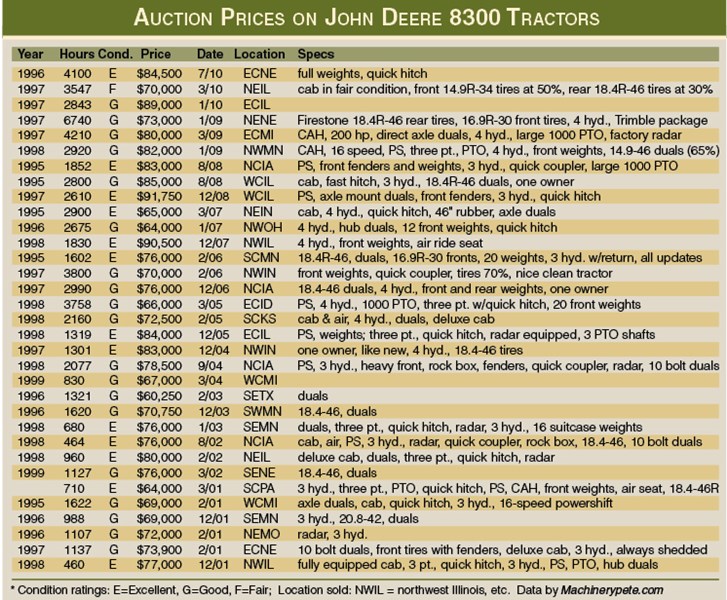