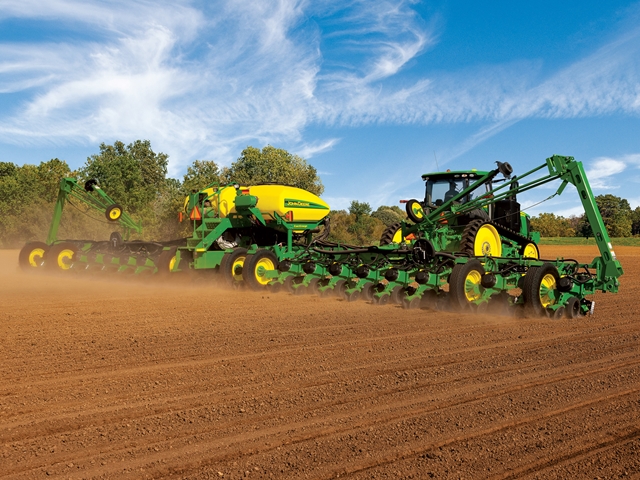 Big data is a big deal. Want proof? John Deere just purchased Precision Planting from Climate Corporation, a subsidiary of Monsanto. As part of the agreement, Climate Corporation gains access to John Deere’s software connection. Terms of the new transaction were not disclosed, and the acquisition is still subject to closing conditions. John Deere hopes to have the deal finalized by Q1 2016.

Precision Planting will be operated independently as a wholly owned subsidiary of John Deere. Climate Corporation will retain the “digital agriculture portfolio” that comprises the company’s FieldView platform. The two companies will collaborate to provide farmers with “exclusive near real-time data connectivity” between certain John Deere equipment and the Climate FieldView platform.

John Deere will acquire the following assets, according to spokesperson Barry Nelson:

•Precision Planting’s leadership, most of its employees, dealer relationships and OEM customers.

Customers will be able to share current and historical agronomic data between John Deere Operations Center and the Climate FieldView platform, according to both companies.

This is the second major acquisition John Deere has announced this week. On Monday, Nov. 2, the company signed an agreement to purchase Monosem, a European precision planter manufacturer, which includes six facilities in France and the U.S.

Deere officials say the strategy behind these acquisitions will allow the company to expand its precision agriculture business and extend the range of retrofit options for customers to more brands and geographies.

Gregg Sauder and his wife, Cindy, founded Precision Planting in 1993 with the goal of perfecting planter technology. They sold the company’s software and hardware products, including seed metering, yield mapping, planter monitoring and fertilizer attachments, to Monsanto in 2012 for $250 million.

“After working for 20 years on innovation in planters, it’s nice to see a machinery company as large as John Deere recognize the value in Precision Planting products,” says Sauder. “Planters are in a sweet spot, it’s now a matter of farmers taking advantage of the technology.”

What Does This Deal Mean for Farmers?

Steve Moffitt, who farms in central Illinois, says the collaboration between John Deere and Climate Corp could get him one step closer to solving the problem of disparate data in his operation.

For example, he's applying anhydrous fertilizer this week. The data set he collects during the field pass is sent wirelessly to his John Deere account. But integrating it elsewhere has been difficult or impossible – until now, he hopes.

“I want to share that information with my FieldView cloud, but today, there’s no way to transfer that data unless I manually enter everything.

Mike Stern, Climate Corp president and COO, says “simple and seamless” data transfer is definitely a goal of the collaboration, a move that “does what our customers have been asking us to do.”

“Growers are asking for seamless data connectivity,” he says. “Our commitment has always been – how can we do this?”

Some farmers worry that since Precision Planting has found new ownership twice in the past three years it will dampen future progress.

“My first thought was how will Precision Planting be impacted if a big company takes control,” says Illinois farmer Steve Pitstick. “Will innovation slow down? Will new product releases slow down?”

Pitstick says John Deere representatives have told him the company will continue to roll out new Precision Planting products, and the dealer network will remain intact.

John Raines, Climate Corp senior vice president, agronomic services, says “arrangements will be made” for other equipment manufacturers who have agreements with Precision Planting. Climate FieldView will continue to be available to most tractor brands; the arrangement with John Deere is not exclusive.

In regards to OEM relationships, Reed says the company plans to maintain existing relationships. He says John Deere plans to reach out and explain its plan to honor current contracts and expand offerings.

AgWeb has contacted Case IH with questions and will bring their perspective to our readers as soon as they respond.

Online industry response has been swift. Here is a sampling of Twitter reactions to the announcement: