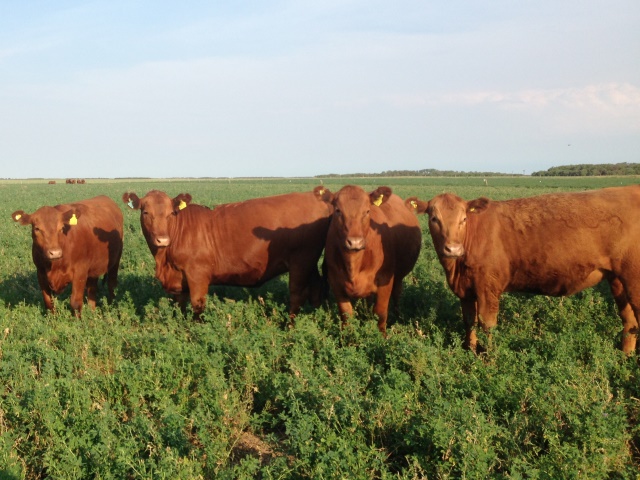 After traveling for hours by air to reach Argentina and Uruguay, a group of Kansas cattlemen found the scenery out their window to look strikingly similar to home. The land, mostly flat with scattered rolling hills, was dotted with cattle as far as the eye could see. Billy Brown, Agribusiness Development Coordinator for the Kansas Department of Agriculture (KDA) led Craig Beran of B&D Herefords, Megan Fink of Fink Beef Genetics and Daniel Mushrush of Mushrush Red Angus to explore Argentina and Uruguay in an effort to research and develop new markets for Kansas beef genetics.

“The ability to lean on these prominent Kansas cattlemen for their expertise in the cattle industry was especially helpful in identifying specific opportunities for future exports,” Brown said. “Their expertise assisted us in crafting a robust strategy for future efforts in the region.”

Kansas exports $5.35 billion dollars annually of cattle, meat, grains and other farm products around the globe. Identifying Argentina and Uruguay as two countries with the opportunities to expand beef exports and enhance marketing for U.S. beef genetics, KDA was able to secure funding for the assessment trip by submitting a proposal to the United States Livestock Genetics Export, Inc. (USLGE) The trade mission’s first stop on the explorative trip was the second-largest country in South America, Argentina. Following Argentina, the group continued to Uruguay. The team visited each country’s breed association headquarters, five ranches and two bull sales. 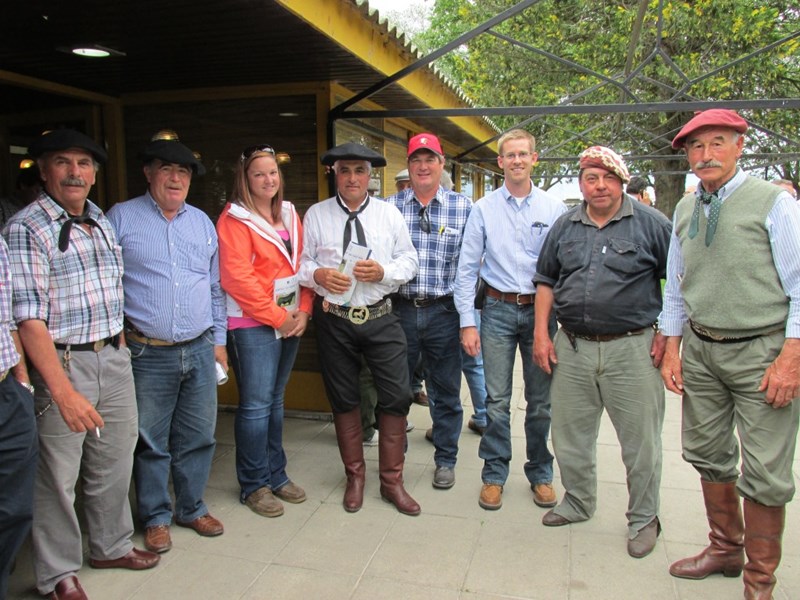 The group with the gauchos, or cowboys, attending the La Cassina Ranch bull sale in Argentina.

Almost 90 percent of the cattle raised in Argentina are Angus. Unlike in the U.S. where the Black and Red Angus associations are separate, Argentina’s Angus breed is comprised of both black and red cattle. Opening and expanding opportunities to export with Argentina would be easy for Kansas cattle ranchers since the Angus breed is very familiar in both countries. Hereford cattle are the second most popular breed in Argentina, another breed with a strong presence in Kansas.

While in Argentina, the team visited Angus and Hereford ranches to assess how Kansas genetics could be an asset around the globe.  The group had the privilege to see calves sired by a Mushrush Red Angus bull.  The semen had been exported to Argentina via CRI International. “It was a validating and humbling experience to see cattle in another country from one of my family’s bull,” Mushrush said.  “It was the highlight of my trip.” Mushrush estimated there were more calves on the ground sired by his bulls there, than at his own farm. “Those calves represented all the hard work my family has put into our bulls and genetics,” he said.

Uruguay is home to approximately three million people and an astonishing 12 million head of cattle. An estimated 50 percent of these cattle are Herefords, 25 percent are Angus and the remaining 25 percent consists of other beef and dairy breeds. The cattle industry in Uruguay is very progressive and open to the use of U.S. genetics. Cattle in both Argentina and Uruguay are smaller in stature than that of the average American breed. Argentinean and Uruguayan producers appreciate a more condensed build which more ideally fits their management style and environment.

Within the borders of these two countries lies tremendous potential for Kansas beef producers. “If it isn’t us, it’s going to be somebody else,” Mushrush said.  Exporting semen and embryos provides another outlet for the Kansas beef industry to expand. “Both countries present significant opportunities for Kansas and U.S. seed stock producers to export genetics in both the Angus and Hereford breeds,” Brown said. “As Kansas agriculturalists, it is our duty to seize advancement opportunities such as these. With our genetics in countries, such as Argentina and Uruguay, the door to future opportunities is just beginning to open.”