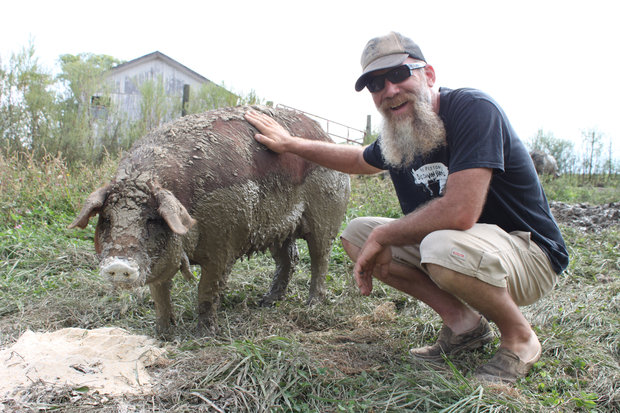 At 10 a.m. there are a lot of mouths to feed at Two Forks Farm in Robertson County.

"That's Luther, and that's Mary Kate. Once they're eating they won't hurt you. They're very docile animals for their size ... really big sweethearts," says Travis Hood as we clamber over the gate into the first of several enclosures.

Our arrival is met with squeals of delight. Unless you're in a boy band, how often do you get to say that?

"There are three intact boys on the property," says Hood. "Luther, Bootsy and Clayton Delaney. You know, the song by Tom T. Hall?" He means The Year Clayton Delaney Died.

The other two boys are named for singers; type their first names into Google and it will quickly fill in the answers.

"Mary Kate had a sister named Ashley, but we ate her."

Hood is clearly a man who savors his words as well as his red, fatty, juicy pork. Real pork, he'll tell you. It's nothing like the so-called "other white meat."

"It's night and day. Most of those pigs never see the light of day. They live their entire life on concrete."

Hood, a Louisville native, moved with his family to Robertson County from Beanblossom, Indiana, two years ago, in search of more room to wallow.

"We started out with one boar, one sow and two feeder pigs, with the goal of feeding our own family."

Now there are 13 sows, three boars and five separate bloodlines. That doesn't include all the piglets. Mary Kate recently gave birth to 11.

If you've wandered Lexington Farmers Market in the past couple years, you've probably seen Hood — in his sunglasses on this late-summer morning, he has a certain ZZ Top quality — often with his mother-in-law, who makes lard soap. Maybe you've heard him promoting the flavor of his Hood's Heritage Hogs, particularly the Red Wattle.

"If you've got something good, why not shout it from the rooftops," he says.

The Red Wattle is a breed that nearly became extinct until a few farmers made it their mission to bring back the swine of their youth.

"Two-hundred years ago there were 20 to 30 breeds with wattles. Now there are only two," says Hood, the Red Wattle and one other. The wattles are easy to spot: They're the dangly little pieces of cartilage on each side of the jowl. But they're harder to explain. Maybe they help cool the animal? Maybe they were designed to protect their necks when swimming?

Like the human appendix, the hog's wattle retains an air of mystery. Sometimes two hogs with wattles will produce a wattle-less pig. When that happens, Hood puts the pig on the fast track to the table. And in case anyone thinks that's heartless, he's happy to explain why it's not.

What it cooks down to is this: Pigs, he says, were put on this Earth to be eaten. We're only making trouble for the planet if we try to tamper with its original formula for success, and we're only sacrificing diversity, not to mention fabulous-tasting meat, when we let the old breeds die off.

The wattle makes or breaks an animal as far as Hood's breeding program is concerned. More about that in a minute. Janice Joplin, Myra and the piglets in the nearby pen are hungry.

"Myra is a Tamworth, an Old English lard hog. We keep her around because when we cross her with the Andrus Red Wattle her babies grow like a son of a gun."

He's talking nearly a 50-pound weight gain by the time they're 8 weeks. Some people prefer not to think about their pork in its childbearing years as a Myra or a Janis. Renowned chef and restaurateur Ouita Michel is one of them.

"I tell Travis I don't want to know the names. I just want to eat the roast," she said.

Michel has served his pork at Woodford Reserve and Holly Hill Inn. "It melts in your mouth. The flavor is fantastic. The way he cares for them shines through."

How it's processed also has a lot to do with how it tastes, she says. Hood's main processor is in Colfax, Indiana, the only part of his operation that is not Kentucky Proud.

"I can't find a processor in Kentucky to do what I want — all-natural cures. In swinespeak, snout to tail, all natural and organic. No chemical nitrates. Bellies, hams, shoulders all natural."

After eight years of working together, Hood says, "even if a place opened up just across the street, it would be hard not to use them." So he drives 280 miles round trip, three times a month.

"Before dark, they'll go down over the hill and find plentiful legumes, white and red clover. In fall, they go out to the woods, and I don't feed them at all. Everything they need is out there: hickory nuts, acorns and a few persimmons."

Studies have shown, he says, that hogs finished in woods with no corn or soy are up to 83 percent unsaturated fat, "with 1-to-1 ratios of omega 3s and omega 6s. That's in the same ballpark as tuna and salmon." That sounds like some pork.

NPR came through last summer and reported on Hood for a segment on Morning Edition. Other networks quickly followed. They all were looking for a pork version of Duck Dynasty. They only wanted to hear about crazy things the family did, not the hogs themselves. Hood wasn't interested.

What Hood is interested in is breeding a new version of an old pig. With his friend "Little Pig Man" and celebrity pork expert Carl Blake in Missouri, he set out in March to re-create a breed that hasn't existed in more than 50 years, a breed that might make it possible for small pasture farmers to compete with factory farms.

"We have all the pieces of the puzzle to re-create the true Italian Siena Gray, bred to create charcuterie, things like pancetta, prosciutto," Hood says.

The first stage in the development is in a nearby pen: three little piglets born two days before to the Andrus Red Wattle D'Lovely and her beau, Bootsy, a Siena Gray but not an old-fashioned, true one.

"These are three very special little pigs," says Hood, holding up the black female, the most special of all. All three have wattles.

"These babies are version 1.1," he says. Next he'll breed the female with a male from a Siena Gray sow and an Andrus Red Wattle male. Those offspring will be Version 2.0, and they'll be halfway to the finished product.

"We decided that if we wanted to put the wattle gene back in this 200-year-old line of pig, this was going to be the place to do it. In Mount Olivet, Kentucky."

And when that happens, it'll be some pig, to quote the spider Charlotte.

Speaking of which, have his kids ever expressed any concerns about his occupation? Have they ever grown attached?

"Oh no, actually you should have read my daughter's book report on Charlotte's Web. She had a very unique take, on what a waste it was not to eat that pig."