Key Things to Know About Federal Land Grazing in the West 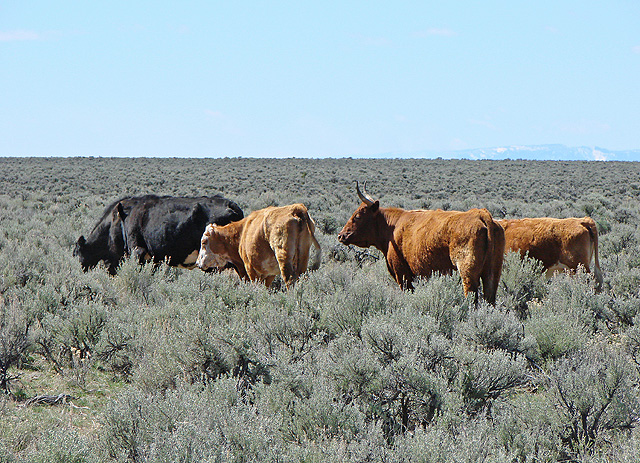 Two brothers leading an armed group that has taken up residence for nearly three weeks at a national wildlife refuge in eastern Oregon plan to hold a ceremony Saturday for ranchers to renounce federal control of public land and tear up their grazing contracts.

Ammon Bundy and his older brother, Ryan Bundy, say the declaration will reject what they consider the unconstitutional ownership of land by the federal government and put an end to public land restrictions and grazing fees.

The Bundys plan to open up the 300-square-mile Malheur National Wildlife Refuge for cattle this spring.

"There's no use to letting this place sit in dormancy and longer," Ryan Bundy told The Associated Press while sitting inside one of the heated wildlife refuge buildings last week, adding that cattle would benefit migrating birds.

He declined to go into detail about whose cattle and how many would be allowed to graze. But those are the questions that for more than a century have shaped federal grazing policy in the West. In recent decades that policy has altered in a way that many ranchers fear is leaving them behind and eliminating a way of life that has sustained generations.

Here's a look at what has shaped the ongoing conflict:

HOW DID GRAZING REGULATIONS ON FEDERAL LAND BEGIN?

In the early 1900s it became clear that overgrazing was reducing productivity, so Congress in 1934 passed the Taylor Grazing Act that created districts to regulate grazing on federal public land and was administered by agencies that would later become the U.S. Bureau of Land Management. The U.S. Forest Service started regulating its rangeland by 1907 after overgrazing by sheep and cattle became a problem. More recent environmental laws, such as the Endangered Species Act, have also shaped federal land use.

HOW DO GRAZING FEES WORK?

For the BLM and Forest Service, grazing fees are based on something called an animal unit month, or AUM. That's defined as the amount of forage needed to sustain one cow and her calf, one horse, or five sheep or goats for a month. That's set through a Congressionally mandated formula. Currently, the cost is $1.69 per AUM. Grazing contracts typically run 10 years. The BLM said that in fiscal year 2014, it spent $34.3 million on livestock grazing administration and collected $12.1 million in grazing fees. Environmental groups say federal grazing fees are kept artificially low resulting in a subsidy for ranchers.

WHY ARE SOME RANCHERS UPSET WITH FEDERAL GRAZING CONTRACTS?

The West is changing, particularly in the last several decades as federal agencies follow policies — or are forced to by environmental lawsuits — that put more emphasis on landscapes that have value as functioning ecosystems and as recreation venues for growing urban populations. As a result, said Boise State University professor John Freemuth, the long-dominant uses of ranching, logging and mining now have to compete with other groups who have a different set of values. That has led to grazing restrictions and some groups, such as Idaho-based Western Watersheds Project, have advocated for eliminating cattle grazing on public land altogether.

"Back in the day, they used to call the BLM the Bureau of Livestock and Mining because that seemed to be the only uses for those lands," Freemuth said. "That's blown away now. You've got urban users. You've got environmental concerns. You can understand how (ranchers) feel threatened by the whole thing."

HOW MUCH FEDERAL RANGELAND IS AVAILABLE?

WHY ARE THE BUNDYS INVOLVED?

Their father, rancher Cliven Bundy, for years has refused to pay grazing fees or follow regulations on federal land in Nevada where he runs cattle. Federal authorities are widely seen as having backed down from trying to enforce rules in 2014. They had been rounding up Cliven Bundy's cattle when he put out a call and armed groups showed up.

So far, authorities have not tried to remove the group from the Oregon refuge. The occupation started Jan. 2 as a protest over two area ranchers who had been convicted of arson being returned to prison to serve longer sentences. Those ranchers have since reported to prison and did not align themselves with the Bundy brothers. Local officials have asked the armed group to leave, and Oregon Gov. Kate Brown has asked the federal government to "hold all of the wrongdoers accountable."

WHAT IS THE MALHEUR NATIONAL WILDLIFE REFUGE?

The refuge in eastern Oregon is managed by the U.S. Fish and Wildlife Service, an agency that administers the national wildlife refuge system for conservation and restoration, and allows wildlife-dependent uses such as hunting, fishing and wildlife watching. The high desert area that contains marshland was designated in 1908 by President Theodore Roosevelt to protect birds that stopped there to rest during long migrations. The key stop for the birds also has become a draw for wildlife watchers and outdoor enthusiasts.