Large Storm Brings Twisters, Floods--and It's Not Over Yet 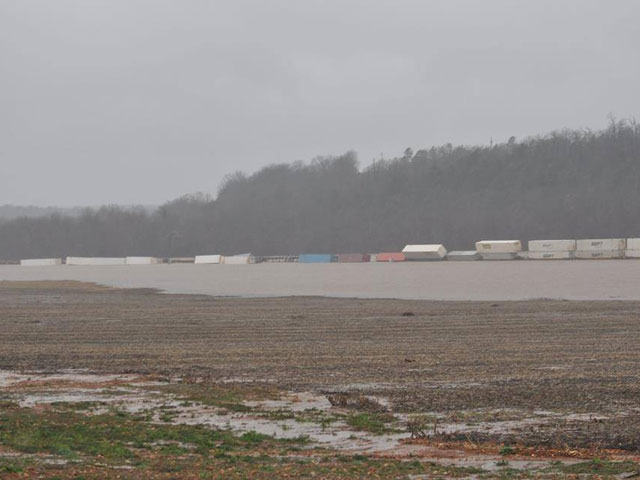 As residents of North Texas surveyed the destruction from deadly tornadoes, the same storm system brought winter storm woes to the Midwest on Monday, amplified flooding that's already blamed for more than a dozen deaths and prompted hundreds of flight cancellations.

At least 11 people died and dozens were injured in the tornadoes that swept through the Dallas area on Saturday and caused substantial damage. That, plus the flooding in Missouri and Illinois, was the latest in a succession of severe weather events across the country in the last week that led to at least 43 deaths.

A range of precipitation was forecast Monday for the country's midsection, including heavy snow, ice and blustery winds in parts of 11 states and heavy rain in already-waterlogged parts of Missouri and Arkansas.

The system caused nearly 900 flights to be canceled — more than a third of which were at Chicago's two main airports — and another 500 to be delayed, according to flight-tracking service FlightAware. A typical day sees about 150 cancelations and 4,000 delays.

In North Texas, local officials estimated as many as 1,450 homes were damaged or destroyed by at least nine tornadoes.

"This is a huge impact on our community and we're all suffering," Garland Police Lt. Pedro Barineau said of the suburb about 20 miles northeast of Dallas, where eight people died, 15 were injured and about 600 structures, mostly single-family homes, were damaged.

The weather service said an EF-4 tornado, which is the second-most powerful with winds up to more than 200 mph, hit the community at about 6:45 p.m. Saturday.

Natalie Guzman, 33, took photos of her family's damaged home in a Garland neighborhood. The only part of the house that appeared to be spared was the master bathroom, where her brother-in-law took shelter Saturday night with his dogs.

"It was worse than I thought," Guzman said, comparing the scene to the photos he had sent Saturday.

In the nearby town of Rowlett, City Manager Brian Funderburk said Sunday morning that 23 people were injured, but that there were no deaths and no reports of missing people. The weather service said damage indicated it was likely an EF-3 tornado, which has winds up to 165 mph.

Dallas County Judge Clay Jenkins said in a statement Sunday night that as many as 600 homes were damaged in Rowlett.

Three other people died in Collin County, about 45 miles northeast of Dallas, according to sheriff's deputy Chris Havey, although the circumstances were not immediately clear.

Texas Gov. Greg Abbott made disaster declarations Sunday for four counties — Dallas, Collin, Rockwall and Ellis — and warned that the number of victims could rise.

On the other side of the state, the Department of Public Safety in Amarillo strongly discouraged travel throughout the entire Texas Panhandle — a 26-county area covering nearly 26,000 square miles — because blowing and drifting snow had made the roads impassable. Interstate 40, the main east-west highway across the Panhandle, was almost completely shut down; DPS said only a small section in Amarillo was open.

Traffic was at an hours-long standstill in West Texas were Interstate 10 splits into Interstate 20 on Monday morning.

Vito Randazzo of California sat on I-10 for about 13 hours. "Everybody's just sleeping in their cars," said Randazzo, who added that the roadway was snow-packed and icy. "I can't believe the road was left in this condition."

Oklahoma Gov. Mary Fallin declared a state of emergency after blizzard conditions affecting the western and central parts of the state and up to a foot of rain fell in the southern and eastern parts of the state. The National Weather Service has said "disastrous" flooding will happen in eastern Oklahoma.

To the northeast, several inches of rain caused flooding in Illinois and Missouri, where Gov. Jay Nixon also declared a state of emergency. More than 180 roads in Missouri were closed Monday morning due to flooding.

Over the weekend, six people died when two separate vehicles drove into flooded roadways in south-central Missouri, Pulaski County Sheriff Ronald Long said; four of them were international soldiers who were temporarily stationed at an Army base. And Greene County authorities said two fatalities there were associated with the flooding.

In southern Illinois, authorities said three adults and two children drowned Saturday evening when the vehicle they were riding in was swept away and sank in a rain-swollen creek.