Livestock Industry will have Strong Rebound 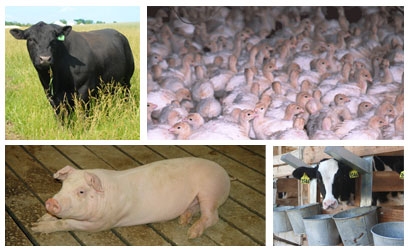 Livestock producers can look forward to an economic “mini-boom” that may last for the next several years, providing opportunities for expansion of herds and flocks, Purdue University agricultural economist Chris Hurt says.

Hurt said high grain prices from 2006-2012 led livestock farmers to downsize herds to cover the extra feed expenses. The price of livestock products then increased, with fewer products available, and consumers had to eat less meat. So this year, prices are record-high for cattle, hogs, poultry, milk and eggs.

With record-high animal prices and now much lower feed prices, profit margins for the animal industries have risen to strongly favorable levels, Hurt said. Profit prospects have these industries ready to expand.

Rising per-capita consumption of meat will also be a driver in this mini-boom phase, since animal products will become more affordable, Hurt said. As an example, the amount of meat available each year reached about 220 pounds per-capita when corn was $2 a bushel. By this year, only 200 pounds is available.

“We can expect that a portion of this lost consumption will be recovered in the next three to five years as producers increase supplies and drive down retail prices of animal products for consumers,” Hurt said.

This positive period for animal agriculture will also be economically good for rural communities with large numbers of livestock, along with businesses that carry animal management supplies.

For more information on the economic outlook for livestock production, see Hurt’s article on the subject.