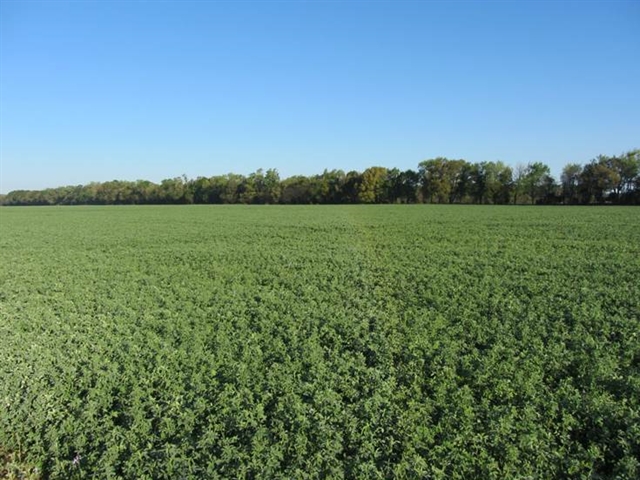 Alfalfa growers have, or will soon have, an additional set of tools available to change the production and feeding of alfalfa—low lignin alfalfa.

This new alfalfa offers the promise of a 20% reduction of lignin. For those who are in a three-cut production cycle, it means the same yields with a 20% improvement in feeding value due to reduced lignin or increased NDFD. For those who are in a four-cut system, it means an additional improvement of low lignin, high NDFD alfalfa that I have referred to as “Super Haylage.”

It can also be reasonably interpreted that there is an advantage of being able to move from a four-cut  system back to three cuttings without the loss in feeding quality--and have a gain in total yield. The advantages are lower production cost, reduced crop stress and fewer trips across the field.

Ramped up conventional breeding systems and the application of biotech techniques will begin to bring not just improved plant characteristics into our farming systems, but the possibility of new attributes to our regular crop systems. Reduced lignin alfalfa seems to be just around the corner of being widely available.

The brown midrib characteristic is well entrenched in corn and other grass forage crops. The concept of breeding alfalfa to supply condensed tannins has the potential to significantly impact the efficiency of nitrogen utilization in diets and throughout the production cycle. I’m sure new and exciting changes will come at an ever increasing rate.

The promise of the low lignin alfalfa is potentially a 15 to 20% increase in alfalfa yields or it can be translated into 2 to 3 lb. more milk per cow.

To realize the promise of most changes in technology or the new practices, a lot of pieces of the puzzle must be fit together. For example, the successful adoption of brown midrib corn silage has not just happened overnight. In many cases, it has taken several years or feeding cycles to learn how to grow and harvest the silage and learn how to incorporate it in diets that take advantage of its unique nutritional characteristics.

How or where to store it in the bunk, how to incorporate it into the feeding systems and what groups of animals it was best to utilize it had to be worked out. And that was for an annual crop.

Alfalfa, being a perennial, compounds the route to adoption into a production and feeding system. It is unlikely that on a farm that produces its own forages to convert wholesale to low lignin alfalfa in a single year or production cycle.

The best scenario would likely be over a minimum of three years. Establishment of new seedings, organizing and implementing the changes in cutting schedules and sorting out the storage, segregating the different kinds of alfalfa and figuring out the feeding strategies will have to evolve over several seasons.

Those who rely on feeding systems with purchased hay may be able to adapt to the higher feeding quality hay forage much faster and easier. But, as it becomes available, I suspect the market will reflect the higher quality feed with higher prices.

I suspect the adaption of “low lignin alfalfa” will be evolutionally rather than revolutionary. Those who can sort out the details and find the niches that work will see improved production and better bottom lines.

Tags:
Nutrition
Analyst: June PPD "Blowing the Doors Off Anything We've Seen Before"
Retrograde Motion
FMC Corporation Partners with Nutrien Ag Solutions to Deploy Arc
A Look at USDA’s Farmers to Families Boxes at the Food Pantry
Jerry Gulke: Will Weather Set the Next Trend?