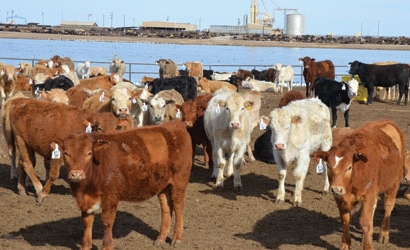 The marketing outlook for cattle is basically a continuation of the last couple years, with more record prices.

"Last year, fed cattle averaged about $126 a hundredweight," he says. "We've had prices at $160 and above this year and are probably going to average $153 a hundredweight for the year. That's an increase of $27 per hundredweight. On a 1,400-pound steer, that's big money."

"The weather has been very good, so the nation has a record corn crop, a record soybean crop and pasture conditions far better than average," he says. "So that means lower feed cost and makes bottom-line numbers very attractive for the cattle business."

The size of the calf crop has declined 19 years in a row, which tightens supplies of beef and boosts prices at the grocery store. In August, choice-grade beef averaged above $6 per pound for the first time ever, Plain says.

Lower feed costs have also helped the profitability of hogs. At the peak of corn prices, the break-even price for hogs was around $75 per hundredweight, but Plain sees that break-even price dropping below $50 this winter.

Pork production is low, in large part due to death losses from the PED virus. Plain says production may increase in 2015 because of fewer deaths and a larger breeding herd driven by lower feed costs.

"Next year we are expecting pork production to be up 3 to 4 percent over this year," Plain says. "It may not set a record, but it will mean lower hog prices. Growth should mean consumers will see lower prices of pork in the grocery store."

Presentation slides from the conference are available for download at http://agebb.missouri.edu/mkt/teleconf/.