Making it Rain with Baleage

Bailing hay comes with many risks. Producers have to wait many hours and often days for hay to dry down. During that waiting period an untimely rain could severely hamper the quality of the hay and set the rest of haying season on standby. Not to mention the fear of fire during the baling and curing processes.

To eliminate some of the risks and improve the quality of stored forages Dan Undersander, agronomist with University of Wisconsin, recommends putting up a wetter version of hay: baleage.

“It’s important to recognize that we have varying qualities of forages that can be put up,” Undersander says. “It’s really important that we feed the right quality of forage to the right cattle to get the best performance.”

Forage is at its highest quality when it is cut, Undersander says. Waiting for it to dry can be detrimental to the quality. Data collected by Undersander on swathed alfalfa shows fiber increases 0.43% per day while fiber digestibility drops 0.43%. Crude protein can decreases by 0.25% each day after cutting.

Baleage lets producers harvest with less weather effects. Dried hay has to be baled at 20% moisture or less in small square bales and even less moisture for large round bales. With baleage moisture can range from 25-70%. The flexibility in moisture content allows producers to speed up the baling process and get work done before a rain that might spoil a normal hay crop.

Speeding up bailing is also good for crop yields. Each day an alfalfa field is driven over after a cutting there is 6% yield lost on the next cutting, so waiting five days to bale hay would be a reduction of 30% in yield. “That’s a big deal and that’s why we should be thinking about getting it off of the field faster,” Undersander says.

Cutting hay into wider swaths should be a consideration for baleage to help shutdown respiration. "If we don’t shut down that respiration the plants break down those starches and sugars, it’s giving off carbon dioxide. You could lose 2-6% dry matter," Undersander says.

When putting up baleage the moisture range of 25-70% is important to keep in mind. Plastic wrapped bales with moisture below 25% have stems that can break the plastic. When bales are above 70% in moisture they produce butyric acid and other harmful byproducts from the increased fermentation rate. Another problem with the bales higher than 70% in moisture is freezing during the winter. 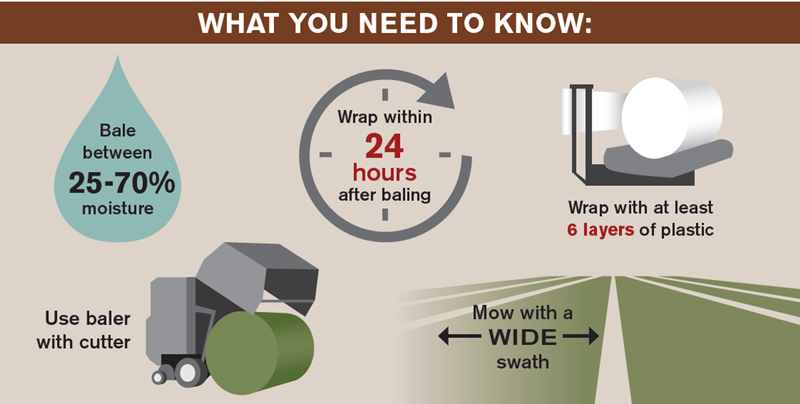 It’s also important to note baleage below 50% moisture simply relies on oxygen exclusion for preservation. If opened bales have a layer of white mold on surface, this indicates that oxygen came through the plastic and either too few layers of plastic were used or the plastic was too porous.

Bales higher than 50% moisture content use both oxygen exclusion and fermentation (similar to storing silage in a bunker or tube silo) to preserve hay quality. The fermentation produces acids that help reduce the rate of spoilage.

When applying plastic wrap around bales Undersander believes it is necessary to put six layers of wrap to reduce oxygen diffusing through. “If you put enough thicknesses of plastic on it is air tight and it is going to be safe as long as the plastic maintains its integrity,” he says.

Bales should be wrapped within 24-hours. A study that looked at heating in bales wrapped during different periods of time showed more damage was done to baleage the longer it sat unwrapped.

Spraying preservatives onto bales is another option to store bales, but Undersander says producers should not use both methods at the same time because they cost the same. “Do one or the other, but don’t do both,” he adds.

If producers are feeding baleage without a bale processor or a grinder they should consider adding a re-cutter to the baler. The re-cutter will allow them to cut the hay into smaller pieces, maximizing the volume of bales, reducing oxygen caused spoilage and increasing the feed value. Undersander recommends having the hay cut into 4 in. lengths.

“There are a lot of farmers that are only using 30% of what they bale. Some are losing 70% along the way, due to poor storage and feeding practices” Undersander adds. “Nobody can stay in business with that kind of economics, even with the beef prices we have right now.”