Beef and cattle prices dropped this past week, but it's still a profitable time to be in the beef industry.
By: Andrew P. Griffith, University of Tennessee

Fed cattle prices found no path to press forward past last week’s record setting price. Live cattle futures faltered late in the week as did boxed beef prices which meant most packers slammed on the breaks when it came to the thought of paying higher prices for live cattle.

There will be continued resistance from packers to pay higher prices for fed cattle which could easily turn positive feeding margins into negative margins. Much of the pressure will come from lower pork and poultry prices as production in both sectors has started gaining traction.

The market is set up for someone to lose money and packers are taking the brunt of the hit, but the tide could easily turn to feedlot managers in the near future. 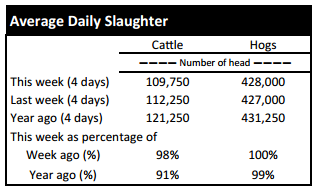 Packers may have received a reprieve this week as small gains were witnessed in boxed beef prices while at the same time fed cattle prices softened. However, price changes were not able to flip packer margins as red ink continues to cover the page.

The primal cuts driving the current cutout price may be a surprise to many, but the export market is strong for the chuck, brisket and short plate. Many Asian countries place a higher value on these cuts than the domestic market. Thus, packers continue to export these products at higher prices than can be achieved domestically.

Ground product continues to see success in the domestic market as fresh 90 percent lean boneless beef continues to trade near $3 per pound at the wholesale level. Weekly fresh 90 percent lean boneless beef prices have been more than 40 percent higher than the same week a year ago since the second week of July. This will continue to support commercial slaughter cow prices, but it may be difficult to pry cows out of producer’s hands with strong feeder cattle prices. 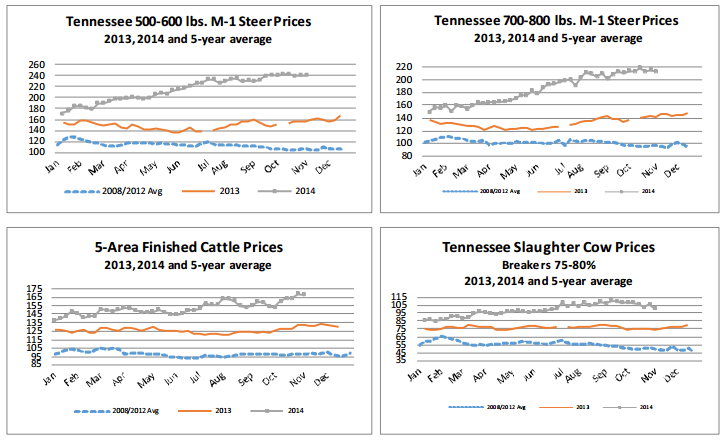 Cattle prices have climbed more than 70 percent the past fifteen months and there is little to no indication of prices falling in the near future. Therefore, returns to the investment in cattle production are expected to remain strong the next couple of years.

High market volatility also increases the cost of purchasing put and call options which makes them less attractive when trying to set a price floor or price ceiling. Market fundamentals have begun putting pressure on both calf and slaughter cow prices. The fall run of bawling calves is in full swing as is cow culling which tends to depress prices. However, cow culling is nowhere near year ago levels.

Beef cow slaughter through the middle of October is 17.5 percent lower than the same time period last year with many of the most recent weeks being down more than 20 percent compared to the same week a year ago. Additionally, heifer slaughter through the middle of October is 8.4 percent lower compared to the same time period a year ago while steer slaughter has only declined 2.7 percent. Reduced heifer and beef cow slaughter indicate producers are attempting to expand the herd and get one more calf out of those older cows. Heifer retention will support feeder cattle prices in the near term which is positive in terms of risk, but it does not mean much for volatility as many of us are aware.