Beef and cattle prices both went up this past week.​
By: Andrew P. Griffith, University of Tennessee

There seems to be a large discrepancy between the cash market and what purveyors in the futures market think is going to happen in the fed cattle market by February as is indicated by the positive $5 to $6 basis. Conventional wisdom would say the market should prepare for a small down turn heading into February, but recent market strength is trying to say otherwise. The most likely situation is for the fed cattle market to soften the next few weeks before challenging record prices this spring. 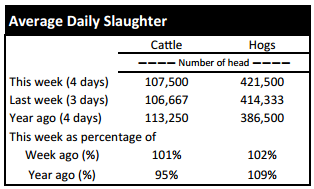 The Choice and Select beef cutout prices continue to surge following the holiday season. It is not uncommon for beef cutout prices to be supported following the holiday season as the beef counter is being restocked, but it is generally not a sustained pace. The current price escalation may be short lived but packers are more than willing to sell boxed beef at higher prices because the pressure of cattle cost remains high. The reason it may be short lived is because beef movement generally slows in February before regaining momentum in late March.

The Choice Select spread is likely to continue narrowing in coming weeks as consumers continue to move from Choice middle meats to Select grade end cuts. The elevated boxed beef prices will not allow the retail price of beef to soften in the near future. Thus, the question among many in the industry will continue to come back to what consumers are willing to pay for beef.

TENNESSEE AUCTIONS: On Tennessee auctions this week compared to three weeks ago steers were $6 to $10 higher while bulls were $3 to $7 higher. Heifers were $2 to $8 higher. Slaughter cows were steady to $3 lower while bulls were unevenly steady. Average receipts per sale were 552 head on 9 sales compared to 0 head on 0 sales last week and 455 head on 11 sales last year. 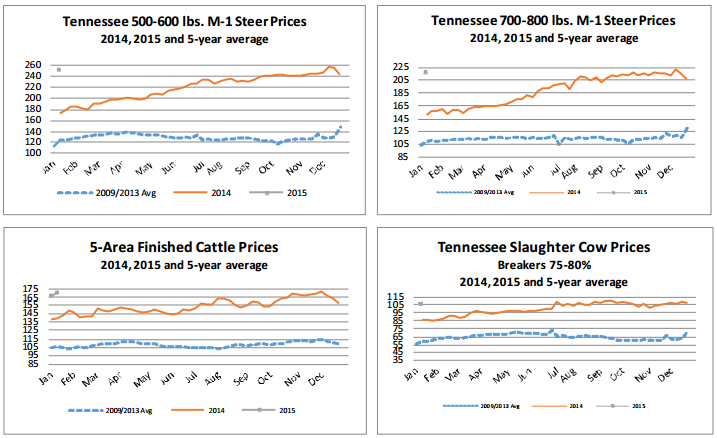 OUTLOOK: Feeder cattle prices struggled the last couple of weeks of 2014 before cash trade took a break for the holidays. The time of softening prices at auction markets coincided with a drastic sell off of futures market contracts. Futures market contracts have rebounded slightly since that decline and have found a somewhat steady state the past few days. However, the rebound in futures prices has resulted in a rebound at local auction markets.

Futures contract prices could escalate to the upper bound that was set in late November and early December but many purveyors in the market would say the market was overbought. Due to the market being overbought, feeder cattle futures witnessed a correction in prices which is why prices dropped so quickly.

Though prices could escalate again, it is more likely feeder cattle contracts will settle in a trading range between $210 and $225 per hundredweight. The trading range seems large at first glance. However, the trading range is rather small considering the magnitude of price fluctuations the past six months. Lightweight calves in local markets might be fairly immune to fluctuations in futures markets the next few months as the market approaches the grass fever run of calves.

Feeder cattle, on the other hand, will be less immune to these price fluctuations. Regardless of the uncertainty in the futures market, cattle buyers are full speed ahead and looking for cattle. This has been very evident for feeder cattle marketed in load lots.

Most market indicators point to prices remaining relatively strong for the foreseeable future, but there is little information pointing toward continued increases in prices. It is almost guaranteed the market will not witness the same linear price increases as experienced in 2014.