Live cattle futures set record high prices this week as many contracts have increased about $8 in the past week and a half. This sudden run-up in prices has cattle feeders chomping at the bit to move cattle, but many packers are hesitant to start placing bills on the table because the beef cutout price has shown little to no sign of increasing. However, cattle feeders are expected to hold their ground as long as futures prices remain elevated.

If feedlot managers are able to force higher prices on packers then it will provide the opportunity for feedlot managers to continue capitalizing on strong margins for a little while longer. It is inevitable for cattle feeders given the price they are paying for feeder cattle that margins will thin and likely become negative. 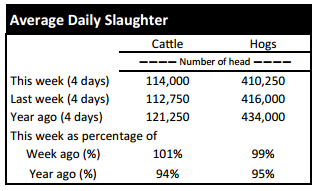 After two weeks of major price declines in both the Choice and Select cutout prices, the market found some stability. Packers have been pressured on both sides of their margin in recent weeks with fed cattle prices trying to move higher and beef cutout prices faltering.

Margins have been fairly thin for the packing industry without the most recent price movements, but the recent strength in the fed cattle price and the decline in beef cutout price have caused the bottom line to result in red ink. Packers will likely have the opportunity to move prices higher late in the fall just prior to the holidays, but a lot of beef will be traded between now and then at not so profitable price levels.

It seems most of the leverage in the marketplace remains in the hands of feedlot managers as they have been successful at forcing higher fed cattle prices on the market. However, packers will regain some leverage in the future which will likely result in cattle feeders being forced to market cattle at unprofitable prices. 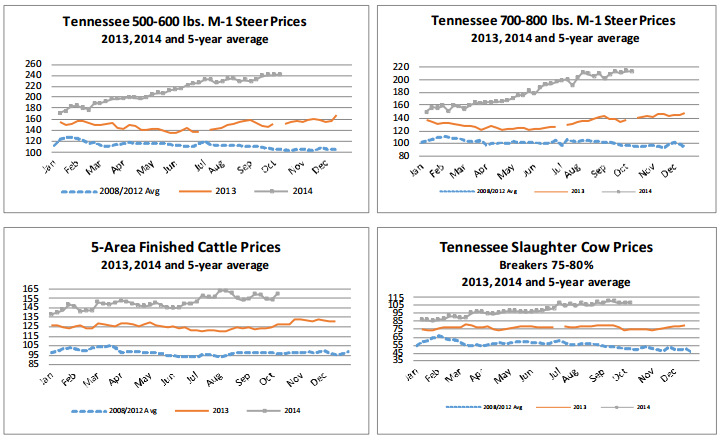 Modest gains were witnessed this week at auction markets across the state for most classes of calves and feeder cattle while nearby and deferred futures contract prices soared to higher altitudes. Thus, there appears to be folks in the cattle industry or speculators in the market place that think feeder cattle futures contract prices should be higher.

It is not evident what information has driven the most recent price increase on the futures market but it has a bullish tone. A large number of stocker calves are on the way to town in the coming weeks. Many of these lightweight calves will head west to wheat pasture in the Southern Plains while another large portion of them will stay in the state or in the Southeast for winter grazing of stockpiled forages or small grains.

The prospects of strong sale prices this fall has never wavered, but some insurance for relatively strong prices came in the form of modest rainfall in many parts of the Southern United States late in the week. Thus, another shower of rain in the coming days or next couple of weeks could firm the potential for promising late fall and winter grazing prospects.

Another factor that will continue to support cattle prices comes in the form of low corn prices that have constantly declined the past few months. Even if grazing prospects were to disappear due to a lack of rainfall, cattle feeders are willing buyers at this point in the game because pen space is available and feed is "cheap."

Cow-calf producers are going to make money this year and next year, but that does not mean the management and marketing side of the business can be omitted. Many producers will miss out on advantageous pricing situations over the next 18 months because of the lack of attention to the market. And, this lack of attention is primarily driven by the fact that prices are so high. On the other hand, producers in the business of purchasing calves may need to devote more time to pricing animals because margins will tighten.