Market Highlights: On the Decline

The cattle markets are on a slight decline, but it's still better than last year.
By: Andrew P. Griffith, University of Tennessee

Live cattle futures prices are jumping around like a child on a pogo stick with no destination in mind. Traders in the futures market are creating volatility that does not seem to exist in the cash market. The volatility in the futures market makes it difficult to hedge cash cattle successfully, because basis risk is starting to overshadow the traditionally more volatile price risk. Fed cattle prices on the cash market have not experienced the same type of price volatility the futures contracts have experienced. The futures price would normally converge with the cash price as the nearby contract approaches expiration and it may still occur. However, if previous months are any indication of the future, cash prices will likely remain at a premium to the futures the next few weeks. 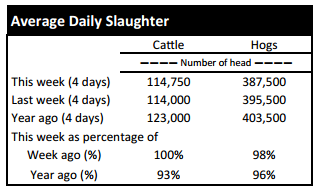 Beef prices are expected to continue to be pressured by the summer heat, but the short supply of beef and cooler fall temperatures are expected to elevate prices once again. Though Choice and Select beef prices have been strong through the summer, packer margins have been anything but robust. Packers have been forced to pay record prices for cattle, which has kept strong profit margins at bay. Packers will be looking to strengthen margins, but that will be difficult heading into the fourth quarter as the supply of market ready cattle thins. This will leave packers trying to push higher prices at the wholesale level while consumers will continue to face record retail beef prices. 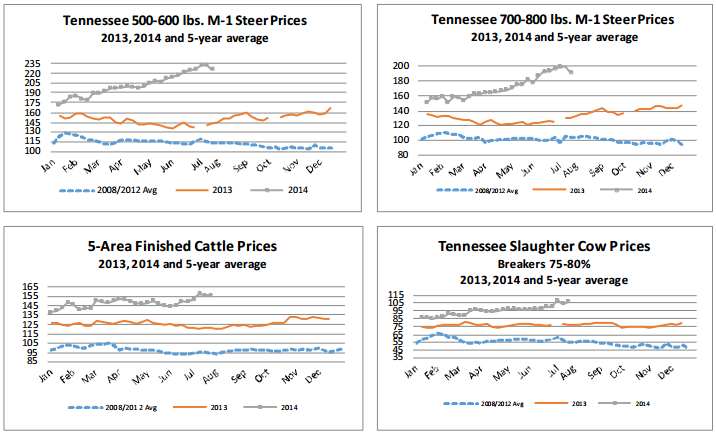 OUTLOOK: The signs of weakness in the local cash markets last week came to fruition this week in the calf and feeder cattle markets. The bottom fell out of calf prices this week which is not a totally unforeseen occurrence. Calf prices generally peak in the spring and then tail off through the summer and fall. However, current fundamentals in the cattle business supported calf prices through the middle of July. The structure that supported calf prices also contributed to the magnitude of the price decline as seasonality finally kicked in. Calf prices have the potential to decline further this summer and into the fall as grass availability fades and as producers bring the spring born calf crop to town. However, fall calf prices are expected to remain strong relative to previous years.

Slaughter cow and bull prices continue to remain strong with little information to indicate a turn in the market. Total cow slaughter as of the end of June is running 12.8 percent lower than a year ago and 10.1 percent behind the five year average. Additionally, it is expected lean beef imports from Australia will taper off as cattle inventory has been severely depleted due to drought which will limit future exports. These two factors have contributed to 90CL boneless beef prices increasing 45 percent from a year ago.