Ten years ago at a commodities conference in Memphis, Tenn., I had my first wake-up call on the potential of China. A Chinese delegate was discussing their emerging grains and energy dependency, and I asked if it was in China’s best interest to be self-sufficient in those areas. The response was "yes, and it is yours as well!" To which I responded, "How so?"

Think about the Chinese population of more than a billion people, the delegate said. "If we put a motor on every bicycle, you don’t have enough fuel. If we build a lean-to for those motor bikes, there isn’t enough lumber. If we eat an extra piece of bread, there may not be enough wheat. We could consume enough to push you into severe shortages and inflation," he said.

I responded somewhat arrogantly that the U.S. is an economic superpower and shouldn’t that concern China? The delegate was quick to respond: "Not in the slightest. We are 6,000 years old. We have seen countries like yours come and go!" I still get a chill as I recall his in-my-face answer and the events that have evolved.

It concerns me that one buyer commands such a high percentage of the world’s soybeans. When China acts, I feel the grip around my economic throat tightening. China has reportedly entered into an agreement with Argentina and Brazil to invest in infrastructure to insure that corn and soybeans are available at market prices.

A small change in consumption of imported goods by the U.S. and European Union (EU) requires a relatively major change in exports by China to compensate. Anything resembling another recession (double dip) in the U.S. and EU could have significant repercussions on China. It is no wonder China continues to buy U.S. debt. They need us perhaps more than we need them. Our world economy and freer market for ag production is very interdependent.

If the U.S. and/or EU export their economic problems to the rest of the world in the form of less foreign demand it could be a two-edge sword for U.S. producers. We will not only lose exports to our traditional customers but also from the 800-lb. gorilla.

In our volatile business of agriculture, long term seems to be 12 months; yet I was reminded 10 years ago that China’s focus is 100 years. The current economic risk and record commodity prices prompted me to recommend to clients to be flexible in managing price risk within their comfort zone using futures, options or cash sales for 2011 and 2012 production. We are staring down an entirely different price barrel than just a year ago, now looking ahead at prices that were only a figment of our imagination a few years ago.

For a more comprehensive look at China, e-mail [email protected] to request our report. 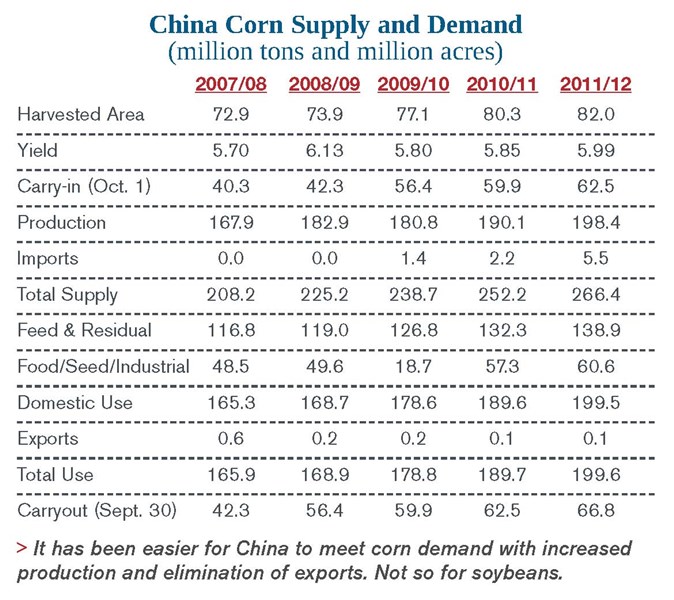 Jerry Gulke farms in Illinois and North Dakota and is president of Gulke Group Inc., a market advisory firm with offices at the Chicago Board of Trade. Gulke Group recently published "Technical Analysis: Fundamentally Easy." For information, send an e-mail to [email protected] or call (815) 520-4227.