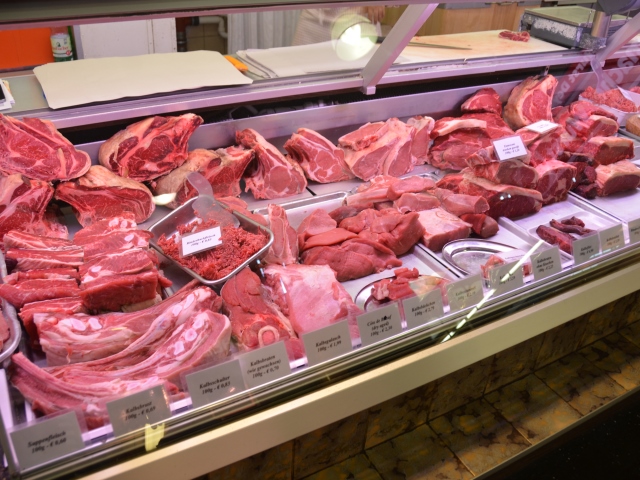 Move over, taxes on carbon and sugar: the global levy that may be next is meat.

Some investors are betting governments around the world will find a way to start taxing meat production as they aim to improve public health and hit emissions targets set in the Paris Climate Agreement. Socially focused investors are starting to push companies to diversify into plant protein, or even suggest livestock producers use a “shadow price” of meat -- similar to an internal carbon price -- to estimate future costs.

Meat could encounter the same fate as tobacco, carbon and sugar, which are currently taxed in 180, 60, and 25 jurisdictions around the world, respectively, according to a report Monday from investor group the FAIRR (Farm Animal Investment Risk & Return) Initiative. Lawmakers in Denmark, Germany, China and Sweden have discussed creating livestock-related taxes in the past two years, though the idea is encountered strong resistance.

Greenhouse gas emissions from livestock are about 14.5 percent of the world’s total, according to the Food & Agriculture Organization, which projects global meat consumption to increase 73 percent by mid-century, amid growing demand from economies like India and China. That could result in as much as $1.6 trillion in health and environmental costs for the global economy by 2050, according to FAIRR, a London-based initiative created by Coller Capital.

“Investors are starting to consider this in a similar way to how they have considered climate risk,” said Rosie Wardle, who manages investor engagements at FAIRR. “It’s kind of accepted now that we need to address livestock production and consumption to meet that 2 degree global warming limit.”

The Guardian newspaper reported on the FAIRR report earlier Monday.

The possible impact of a meat tax could be similar to sugar taxes. While sugar taxes aimed at fighting obesity in the U.S. have faced some resistance, similar levies have been implemented in 18 countries and six U.S. cities, according to data compiled by Bloomberg Intelligence. When Mexico imposed a special tax in 2014 on sugary drinks, it lowered per capita consumption of those beverages by 6 percent in 2014, 8 percent in 2015 and 11 percent in the first half of 2016, according to Mexico’s National Institute of Public Health.

The idea of taxing meat has been hamstrung by fears of creating a political backlash by taxing farmers, FAIRR said in the report.

Plant protein, however, is already capturing a sizable amount of demand for protein, pushed partially by millennials and a trend toward incorporating more vegetarian food into Western diets. About 4 in 10 Americans and Canadians are actively trying to incorporate more plant-based food into their diets, according to a Nielsen Co. global survey.

"Besides all of the risks that are in the meat industry, where you are talking about huge amounts of emissions and water pollution, this is about diversifying and figuring out what areas can lead to growth," Marissa LaFave, shareholder advocate at Boston-based Green Century, said in an interview.

Tyson, which described itself for years as a producer and marketer of chicken, beef and pork, is quickly recasting its image. The company now calls itself “one of the world’s largest food companies and a recognized leader in protein.”