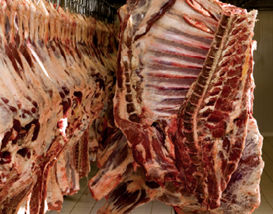 The Mexican government is in the process of making regulatory changes that allow for import of U.S. beef and beef products derived from cattle of any age. This important development lifts the 30-month cattle age limit for U.S. beef and effectively removes the last of Mexico’s BSE-related restrictions.

"This is an issue that USMEF has been working on for a number of years, and resolving it has been a lengthy process," said Chad Russell, U.S. Meat Export Federation regional director for Mexico, Central America and the Dominican Republic, contractor to the beef checkoff. "We received excellent support on this issue from FAS officials at the U.S. embassy in Mexico, who always made sure that it was front-and-center whenever U.S.-Mexico trade issues were being discussed at high levels. Though it took some time, these efforts have now paid off."

The changes to Mexico’s import regulations were to take effect April 30, though shipments of over-30-month beef cannot begin until the USDA Food Safety and Inspection Service (FSIS) updates its Export Library. USMEF expects this process to be completed within the next few days. This will also allow the USDA Agricultural Marketing Service (AMS) export verification (EV) program for Mexico, in which approximately 170 U.S. establishments are currently enrolled, to be terminated.

According to information provided to USMEF, Mexico will accept either the new FSIS letter certificate or an existing letterhead certificate, along with the corresponding FSIS form, for product currently in the pipeline and for new shipments made over the next few weeks. So exporters will have some time – likely until late June – to make the transition to the new letterhead certificate and other documentation requirements.

"This should have a positive impact on our ability to export more beef to this large and important market, particularly in the current environment," Russell explained. "We’re experiencing a period of very high beef prices and constraints on supply, in what has always been a rather price-sensitive market. So we feel that having new supply options available will help us maintain a strong presence in the market and grow our export volume to Mexico." 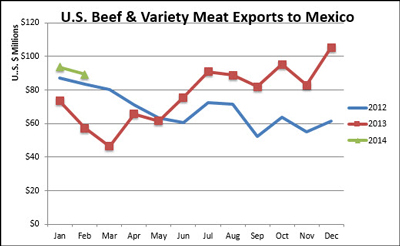 Despite concerns over rising beef prices and tight supplies, the Mexican market has been performing well. U.S. beef/beef variety exports have been above year-ago volumes in each of the past nine months, and 2014 exports (through February) were up 26 percent in volume (37,638 metric tons) and 40 percent in value ($182.9 million) from the same period in 2013.

The U.S. holds about 90 percent of Mexico’s imported beef market, with the remainder captured mostly by Canada. Canada’s market share has edged higher in recent months, likely due to increased affordability as Canada’s beef production has been recovering and the Canadian dollar has weakened. But with the exception of livers, Canada’s exports to Mexico are still limited to beef derived from cattle less than 30 months of age.

"Mexico’s domestic beef supplies have been shrinking due to the prolonged drought, and there are not a lot of other foreign suppliers serving the market," Russell said. "But that doesn’t necessarily make it easy for the United States to grow our exports to Mexico. We need a reliable supply of beef cuts that are affordable for everyday Mexican consumers, and that’s where elimination of these import restrictions is really going to be helpful."

Exporters who have questions regarding these regulatory changes may email Cheyenne Dixon or Chad Russell for further information, or call 303-623-6328.

For more information about your beef checkoff investment, visit MyBeefCheckoff.com.