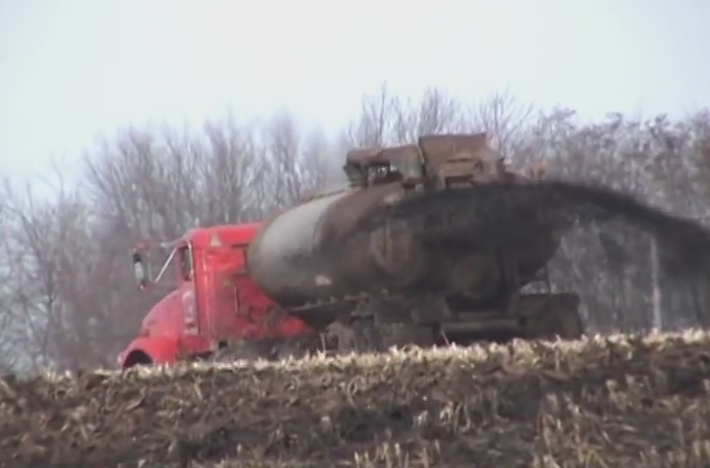 Manure
( Frame grab from the video )

A large southeastern Michigan dairy farm and the state's environmental regulators say the farm's practice of spraying manure on croplands is OK.

The Detroit Free Press reports the response from Hudson Dairy and the Michigan Department of Environmental Quality comes after Environmentally Concerned Citizens of South Central Michigan recorded video of a truck spraying liquid manure this month.

The environmental group says it worries runoff from the farm will make its way into Lake Erie, where toxic algae blooms this summer tainted Toledo, Ohio's water supply. Janet Kauffman, a volunteer with the nonprofit group, says that could contribute to future algae blooms.

The farm is regulated as a concentrated animal feeding operation, or CAFO. Michigan DEQ spokesman Brad Wurfel called the environmental group's actions a "PR stunt" that "muddies an important conversation" about how to safely accomplish large-scale food production.

Rachel Koleda of the DEQ's water resources division says the farm's permit prohibits manure application to frozen or snow-covered ground, but the ground was unfrozen at the time of the video. Manure spreading also is prohibited on the farm between Dec. 15 and March 15.

Milk Source's director of public affairs Bill Harke says the manure is turned into the soil "so when it's time to plant in the spring, the nutrients have been working already." The farm near Hudson has about 3,400 cows. It's located about 40 miles from Toledo.