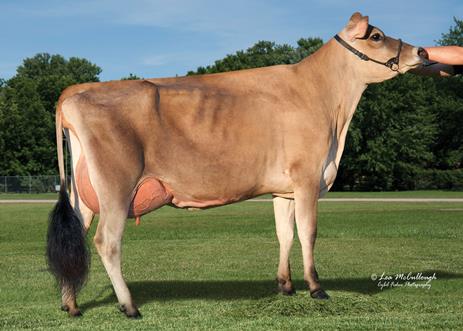 New records for Jersey production were established in 2013.

Registered Jersey™ cows from Minnesota and Washington were recognized with the American Jersey Cattle Association’s (AJCA) highest production awards during its annual meeting on June 28, 2014 in Alexandria, Va.

Highview TBone Vodka, bred and owned by James L. Oelfke and Family of Hamburg, Minn., won both the President’s Trophy and the Hilmar Cheese Yield Trophy. The President’s Trophy is awarded for the year’s high m.e. protein record, with the Hilmar Cheese Yield Trophy presented to the cow with the highest yield of 38% moisture Cheddar cheese, calculated from actual production of no more than 305 days.

The American Jersey Cattle Association, organized in 1868, compiles and maintains animal identification and performance data on Jersey cattle and provides services that support genetic improvement and greater profitability through increasing the value of and demand for Registered Jersey™ cattle and genetics. For more information on the association’s complete line of services for dairy business owners, visit the website at www.USJersey.com or connect at facebook.com/USJersey.