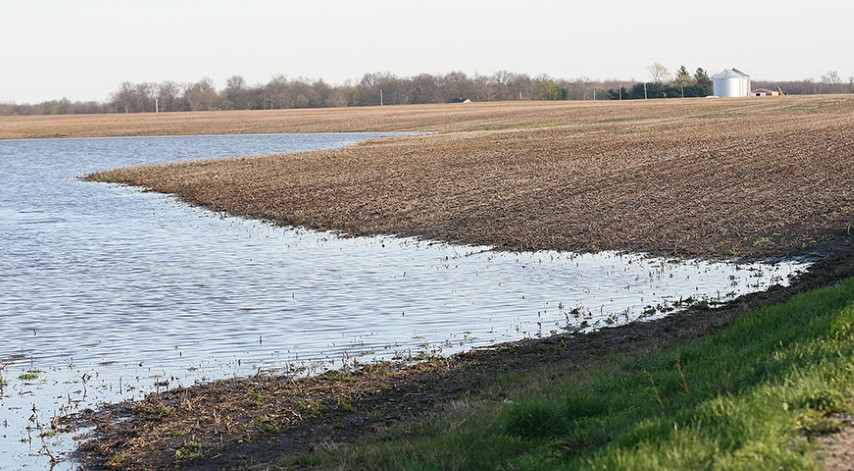 WEST LAFAYETTE, Ind. - Last year, farmers didn't have nearly enough rain for their wilted, drought-ravaged crops. So far this year, they have too much of it - so much that they can't get into their fields to work them for planting.

The stark contrast in conditions illustrates an annual, monthly and sometimes daily reality that farmers have to contend with as part of their jobs - uncertainties of the weather and their dependence on it.

"The challenge farmers have is in dealing with extremes," said Purdue Extension agronomist Tony Vyn, who advises farmers on the best tillage methods for different crops and soils.

Indeed, Indiana farmers are almost getting used to dealing with both extremes - what Purdue Extension corn specialist Bob Nielsen refers to as "roller coaster years" of late.

This year, true to form, the problem is late planting. It has been so slow that it is among the five slowest years for spring planting in the past 20, Nielsen said.

Indiana had the seventh-wettest April on record, with a statewide average of 6.4 inches of precipitation - nearly 3 inches above normal.

As a result, only 1 percent of Indiana's corn crop was planted by the week ending April 28, compared with 67 percent last year - an even-numbered year when some farmers planted as early as March - and the five-year average of 30 percent, according to the U.S. Department of Agriculture's National Agricultural Statistics Service. Soybeans are not yet reported because they typically are planted a few weeks later than corn.

Depending on conditions of individual fields, farmers would need several days for fields to dry to the point where they can work in them. Unlike a homeowner mowing the lawn just hours after a rain, farmers can't just drive their equipment onto their fields so soon.

"It's different for farmers," Vyn said. "They shouldn't be out there."

Heavy farm equipment on a wet field can compact the soil, and seeds planted in compacted soil might not grow the necessary root systems for optimal plant development.

Vyn advises farmers anxious to get into their fields not to succumb to three common tillage temptations: tilling too early or too often and when it's too wet. He says farmers need to be patient and wait for a break in the weather.

That break will come, but slowly. The outlook for the first half of May is continued frequent rainfall with below-normal temperatures for Indiana, said the State Climate Office, based at Purdue University. Both temperature and rainfall should moderate to more typical May conditions later in the month. At this time of year, normal rainfall is near 1 inch per week.

When farmers do get into their fields, Nielsen says 25 percent to 30 percent of the corn crop could be planted in a week and the rest of it a week later - still in time for maximum yield potential.

"So we can catch up pretty fast," he said.

Yield potential typically is greatest in Indiana when corn is planted by May 10, but tillage, soil fertility, and mid-summer rainfall and temperatures are among many other factors that influence yield.

"By itself, delayed planting isn't a sure path to lower yields," Nielsen said.

Farmers in 2009, for example, had planted only 20 percent of the crop by late April because of wet conditions, yet their yield at harvest was 9 percent above trend.

But if farmers can't get into their fields by mid- to late May, they might have to decide whether to plant hybrid seeds other than they originally planned. The switch would be to a hybrid that would take less time to mature so the crop could be harvested before the threat of an autumn killing freeze. The tradeoff for them, however, is that such earlier-maturing seeds might not yield as much grain and, consequently, not as much income.

Detailed information on what farmers would need to consider if they are seriously delayed in planting corn is available at http://www.agry.purdue.edu/ext/corn/news/timeless/HybridMaturityDelayedPlant.html.

Weather conditions in early May aren't crucial for soybeans since many farmers plant their corn ahead of soybeans. Planting of soybeans, therefore, also could be delayed. Soybean farmers usually are at the early stages of planting at this point, with nearly half of the crop planted by May 20. Planting can extend well into June.

Still, eventually soybean farmers, too, will depend on the weather for favorable conditions so they can do their job.

"Just because it's a day in a workweek doesn't mean you can get out in the fields to work," said Shaun Casteel, Purdue Extension soybean specialist. "A person working in an office goes to work rain or shine. Not so for farmers."