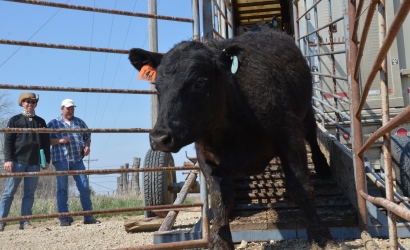 Humane transport of livestock is important for both carcass quality and animal welfare. However, it is difficult to mitigate stress for animals in-transit. During a typical journey, calves lose weight due to the stress of weaning and being withdrawn from feed and water during transport. Many factors contribute to this stress, including welfare of the calves before transportation, and temperature and space allowance inside the trailer during transportation. A better understanding of the pre- and post-transportation risk factors and in-transit factors that influence calf welfare will inform strategies for improving animal welfare outcomes.

Thus, 2,238 Canadian beef calves, representing 24 commercial loads transported from auctions or single sources to 4 feedlots, were evaluated for transportation welfare between September 2010 and November 2012 in Alberta. Two articles summarizing the results are featured in the November 2014 issue of theJournal of Animal Science: “Trailer microclimate and calf welfare during fall-run transportation of beef calves in Alberta” and “Trailer microclimate during commercial transportation of feeder cattle and relationship to indicators of cattle welfare”.

Calves in the study received ear tags with devices that recorded temperature and humidity of the air around them. Similar data loggers were also fitted around various parts of the inside of the trailers (the “deck,” “doghouse,” “belly,” and “back” compartments, 3 to 5 cm below the ceiling) and also to the driver’s and passenger’s mirrors to record ambient conditions. Truck drivers maintained a log of cattle, recording their conditions before the journey, at any stops during which calves were checked, and when they were unloaded at their destination.

The study compared the relationship between cattle welfare and trailer microclimate during journeys between 11 and 23 hours in duration. Calves were weaned between 24 and 48 hours before transportation and had access to hay and water in the interval between weaning and transport. Space allowance was also taken into account and ranged from 0.56 to 1.17 m2/animal. Stress was measured before and after transit through salivary cortisol levels, hematocrit, shrink (percentage of initial body weight lost during transport), and morbidity.

Despite the rise in stress levels in the cattle, most animals arrived at their destination healthy and in good condition. The transportation process did not appear to cause distress to the livestock. Because the calves still expressed some degree of stress, the authors suggest that further research should be conducted on the relationship between transportation and cattle welfare.

“We inferred that the study results support future investigation of the extension of in-transit microclimate as a risk factor for post-transport treatment and disease,” the authors wrote. “…The influence of transport did not result in poor welfare within the study population but may be of importance for higher-risk cattle.”