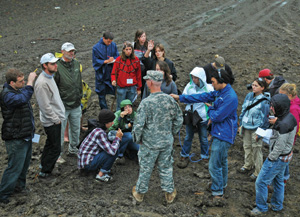 A trip to the levee results in a flood of questions

It makes little difference whether the newshound is mucking through the halls of Congress or looking down the rows of an Iowa corn field: Good journalists get to the location to ask the relevant questions, and they aren’t afraid to get dirty doing it.

Mentoring the next generation of journalists was one of Hillgren’s greatest passions. Each year, Farm Journal supports an Ag Journalism Field Reporting Institute at the University of Missouri in her honor. This fall, 16 students and 10 faculty members embarked on a three-day, 500-mile journey to explore forests, crop fields and floodways.

After visiting Pioneer Forest in the Ozark Mountains, where students heard a treatise on hardwood timber management, they motored further south. In the Missouri Bootheel region, they wrapped their minds around issues influencing the cotton industry. Charles Parker, president of the National  Cotton Council and a Senath, Mo., cotton grower, gave a seed-to-bale tutorial.

You had to be there. Hillgren’s muddy- boots mantra became a real-life metaphor for the group at the New Madrid Floodway. In May, the U.S. Army Corps of Engineers blew three holes in the levee system to relieve the threat of flooding upstream and downstream.

The scars of the intentional flood left the students stunned. Most of the estimated 90 homes in the 133,000-acre floodway are still filled with mud and unoccupied. Students somberly walked and photographed the streets of flooded homes in the small town of Pinhook, Mo.

Kevin Mainord, a farmer and mayor of the town of East Prairie, Mo., voiced his concerns about inadequate and delayed repairs to the blown levee. He still questions whether it was necessary to blow the holes and if it really did any good.

The students heard the other side of the story from Maj. Jon Korneliussen of the Corps of Engineers, who told them that the Corp was obligated by law to blow the levee. After a flood in 1927, the 35-mile Birds Point-New Madrid Floodway was authorized by Congress to manage high-water events.

With rain pouring on notebooks and cameras, Korneliussen waded with the group through the mud to inspect the reconstruction of the levee. At the base of the levee, lush stands of soybeans slurped up the rain. While the levee breach washed away knee-high corn and heady fields of wheat, an estimated 80% to 90% of the acres were replanted to soybeans by early July.

Lessons learned. Emily Garnett, a journalism graduate student from Gettsyburg, Pa., reflected that the frustration of wading through the mud at the levee was a symbol of the difficulty of sorting through facts and opinions.

After the experience, Garnett wrote in her class journal: "Every story starts off so simply. You have an event; you talk to a person; you get a perspective. Then you talk to another person, get another perspective. Then you look at the place where it happened. More nuances and issues invade. Before you know it, your story is a giant sticky mudball that is squelching out of control with every new step. You’re seriously tempted to take off your boots and give up."

What Sonja Hillgren knew and what Garnett discovered is that journalism records life. It is complicated and messy, but those with a passion for the truth suck it up and keep on trudging.