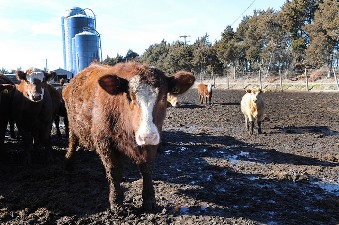 Livestock producers may not be able to eliminate all the stress placed on herds by Mother Nature, but if they want to maximize animal performance they should make management decisions to minimize animal exposure to mud and provide protection from adverse weather conditions.

"Rain, snow, ice and extreme temperatures are a part of life in Kansas," Reinhardt said. "However, each of these factors can steal a measure of the animal’s performance as that animal moves outside of its comfort zone, called the thermal neutral zone."

Thermal neutral zone for healthy cattle is 23 degrees to 77 degrees Fahrenheit. When the temperature outside falls below or rises above the animal’s comfort zone, the body needs to produce more energy to stay cool or keep warm.

Feedlots and winter-feeding sites can quickly become muddy after receiving moisture and animals are active. If cattle are too tightly confined and feeding grounds are not sufficiently spread out even calving pastures can become riskily muddy.

Reason for Concern
Reinhardt explained that producers should be concerned with the effects of mud in their pens because of four main reasons.

"Under stress-free conditions, only about half of animals’ normal daily energy intake goes toward gain," Reinhardt said. "All these increases in energy expenditures dramatically cut into what is left over for gain."

The National Research Council reported that mud four to eight inches deep can reduce feed intake of animals by five to 15 percent. 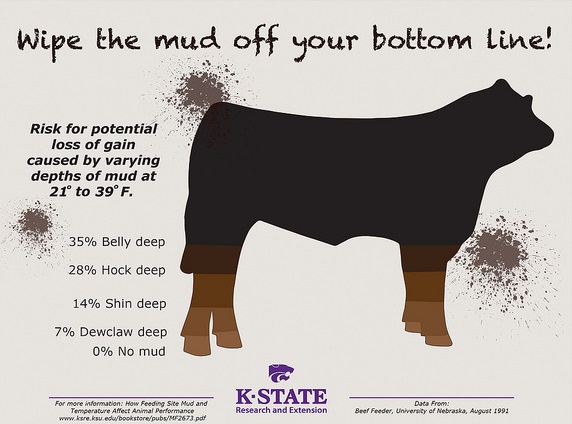 When the temperature drops between 21 and 39 degrees Fahrenheit, mud that is dewclaw deep has the potential for a seven percent loss of gain and the percentage doubles when the mud reaches shin deep.

Prepare for Mud
Reinhardt encourages producers to prepare for muddy conditions; even though they won’t eliminate the costs proper planning can reduce them. He suggests the following:

More information on the affect of mud and weather on cattle performance is available in "How Feeding-Site Mud and Temperature Affect Animal Performance," K-State Research and Extension publication MF2673, available at county and district Extension offices and online.