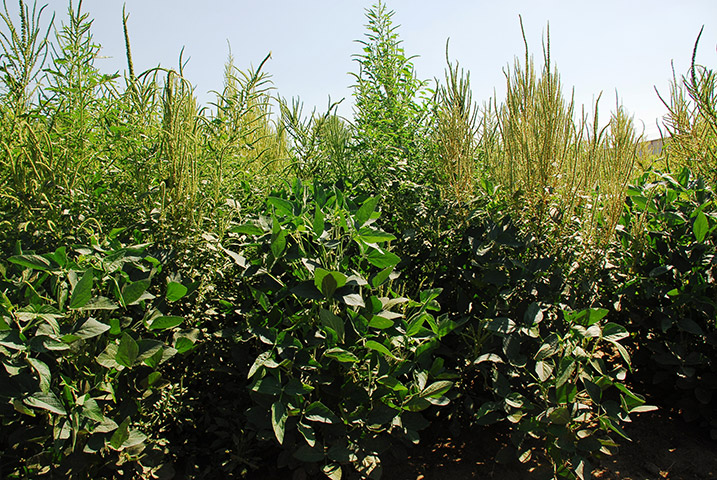 Now is the time to get a leg-up on weeds. This means strategically planing your control measures with best management practices to outsmart resistant weeds.

Weeds steal around $4 billion from farmers each year. Management costs are one of your biggest variable expenses, so it pays to be smart. Learn to differentiate myth and fact on weeds and herbicides.

1. Thanks to new herbicide-tolerant crops it will be “one and done” herbicide again.

That’s just not the case. You and your neighbor’s farming methods have to change to avoid letting weed resistance gain a foothold in more herbicide groups.

“Hopefully we learn from experience,” says David Tanner, Bayer product manager. “In 2003, 75% of soybean acres in the U.S. received only one mode of action, glyphosate, and we’ve learned we can’t use chemistries like that and expect them to last. Recent research from the University of Illinois shows if we use two or more effective sites of action in the tank, you’re 83 times less likely to develop resistance than if you just rotate herbicide site of action.”

“I want to remind farmers where we got into trouble in the past was when we applied one mode of action over and over,” says Ryan Rector, Monsanto’s technology development manager for dicamba. “That’s where we got our resistant weeds today and we don’t want to do that to dicamba—it’s not a stand-alone product.”

2. New herbicide traits and formulations have no resistance.

Incorrect. The herbicides that are paired with new herbicide-tolerant crops are several decades old and have pockets of resistance in multiple weed species.

In addition to Roundup Ready, LibertyLink and Roundup Ready 2 Xtend, farmers will soon have access to Bayer’s Balance GT soybeans and Dow’s Enlist corn, soybeans and cotton. Balance GT allows farmers to spray HPPD inhibitors and glyphosate over the top of soybeans, and Enlist crops can spray glyphosate and 2,4-D over the top. Enlist’s cotton trait and herbicide system launched this year.

The newest herbicide group of the bunch is HPPD inhibitors, marketed in 1992. Dicamba has been around since the 1950s and 2,4-D since the 1940s. This time on the market gave weeds the chance to develop resistance. Glufosinate, on the other hand, has no known resistance, but stewardship is important to keep it that way.

“Resistance is always something to keep in mind,” Rector says. “For states like Nebraska, with pockets of dicamba resistant kochia on the western side, we recommend growers get with county agents to understand where resistance exists—it’s not across the whole state, but we want folks to re-examine their overall weed-control systems and find products that are effective.”

Resistance in new herbicide systems doesn’t mean they’re ineffective; they could work on hundreds of weeds with just one or two misses.

Click on your state to see what possible resistance is in your area in Group 4 and Group 27 herbicides. Remember, these chemistries have existed since the 1960s and 1980s, opening the door to resistance issues.

3. New herbicide-tolerant crops will encourage farmers to use older, harsher and less safe chemistries than glyphosate.

It doesn’t matter how old or new the chemistry is, all must pass the same safety tests such as volatility, drift, food safety and environmental risk assessments. Herbicides undergo routine safety reviews every 15 years, where companies re-prove the safety and efficacy of the product.

“They have met the same stringent U.S. regulatory standards and have been through the same thorough health, safety and environmental evaluations as glyhosate,” or any other herbicide, according to the Weed Science Society of America (WSSA).

By law, the Environmental Protection Agency (EPA) is required to prohibit herbicides used on food crops if there is a risk to humans. Testing must also prove the chemicals won’t pose unreasonably adverse environmental effects.

4. Herbicides are the only way to gain control of weeds.

Not true. Relying on herbicides too heavily could lead to ineffective chemistries more quickly. Harken back to a time when herbicides were less common and consider employing methods of old such as tillage, crop rotation or cover crops.

Tillage is a non-chemical way to reduce weed growth. Burying seeds drastically decreases their germination rates. Weeds such as waterhemp and Palmer amaranth have short seed life, about five years, and burying them could put you one step closer to eradicating these weeds from your field.

Also consider the effect crop rotation has on weeds. Just like crops, weeds need sunlight, water and nutrients to survive. Bushier crops, such as soybeans, could out-compete small weeds better than corn or other grass-like crops. Watch your row width, too, narrower rows could lead to faster canopy closure in both corn and soybeans, which dramatically reduces weed seed germination and growth.

5. With enough herbicide, you can spray your way out of a resistance problem.

It’s not that simple. Using the right rate and multiple effective modes of action is critical. But herbicides that already have weed resistance will likely remain ineffective or soon adapt and become ineffective even at a higher spray rate.

Don’t try to overcome weed resistance by upping your herbicide rate. If it’s resistant, you likely won’t kill the weed and you could be risking greater crop damage. Instead, if you have weed resistance, focus on herbicide tank mixes that provide effective modes of action against target weeds.

“Always use the label’s full rate of the herbicide,” says Bryan Young, associate professor of weed science at Purdue University. “Don’t give weeds a fighting chance. Even effective herbicides can fail at lower rates.” He says you should have two, preferably three, effective modes of action against
target weeds.

6 Superweeds were created when herbicide-tolerant crops crossbred with weeds.

Not true. Weeds did not get cross pollinated by GMO crops to create a mutant—it all boils down to basic evolutionary science.

“Herbicide-resistant weeds have been around for decades,” Young says. Roundup Ready crops weren’t introduced until 1996, and the first resistant weeds were discovered before the 1960s. The math alone shows cross pollination is not the problem.

The fact is, when farmers spray the same herbicide over and over, chances are at least one weed will have natural genetic defenses against the herbicide. This natural “mutant” gene would then be passed down to that weed’s offspring and those resistant seeds
would spread by machine, animal or other means. In the case of weeds such as waterhemp or Palmer amaranth, which produce hundreds of thousands of weeds per plant, resistance can spread very quickly.

“Resistant weeds usually have only one mutated gene that confers resistance to the herbicide,” according to WSSA. “The mutation does not give the weed an advantage in the absence of the herbicides.”

Weed control might not be as easy as it was in the late 1990s, but it doesn’t have to become impossible. Focus on weed control facts, help dispel myths and keep herbicides effective to protect your fields from damaging weeds for many seasons to come.

Tags:
Weeds
Celebrating the Freedom to Trade
4 Questions To Ask Before Switching From GMO to Conventional Crops
Signal to Noise: The China Signal to Watch For
Tale of the tape: NAFTA era trends in U.S. produce trade
Salmonella Dublin Makes Inroads In The Beef Industry