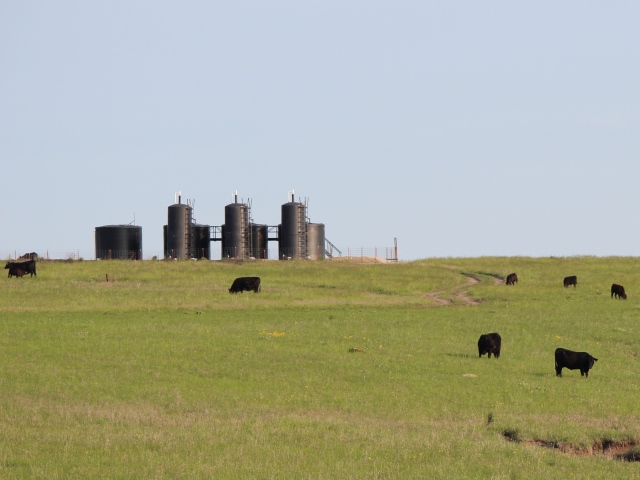 Public access to nearly 2,500 acres of the Cimarron National Grassland has been halted after seven cattle were found dead last year.

The deceased livestock were found by a petroleum worker who was checking an oilfield lease north of Rolla, Kan. on Oct. 24, 2015. A report was filed to a range manager with the Morton County Grazing Association, a local cooperative of 62 members who graze the 108,175 acre grassland.

The owner of the cattle contacted veterinarian Tera Barnhardt, from nearby Johnson, Kan., to perform necropsies.

With the cattle being out on pasture Barnhardt took into account that six of the seven animals were in close proximity to one another in what she describes as a “sudden death” situation and an “odd scene.” Lightning was instantly ruled out with no visible burn marks or charring. Six of the cattle were found together in a low lying area, while an additional deceased cow was found a short distance away.

“The cattle appeared to be just walking and then fell over,” Barnhardt says.

Toxicity from ingestion or inhalation of something toxic was identified as a possible culprit, but no exact cause could be identified right away.

The seven cattle ranged in age and sex from a 10-month old steer and heifer to several three year-old cows.

Tissue samples were sent to the diagnostic lab at Texas A&M for further examination. The lab has some familiarity with these types of cases because of the prevalence of oil and natural gas drilling in Texas.

“There were pretty non-specific findings from that,” Barnhardt says of the lab results. Pulmonary edema or fluid in the lungs was the only thing that was identified.

“With the lack of lesions in any other organs, it can be consistent with but is not necessarily diagnostic to an inhaled toxin,” Barnhardt relates.

Hydrogen sulfide might be to blame. The toxic gas can sometimes be released when drilling for oil and natural gas.

Additional ocular fluid samples were sent to Iowa State University to test if hydrogen sulfide was absorbed. “It is not a test that exists, it is in development,” Barnhardt adds.

The test results came back as inconclusive.

Barnhardt’s colleague Al Collingwood has been working in the immediate area since 1999 and practicing veterinary medicine for 30 years. Collingwood had never seen an incident like this. Barnhardt contacted extension veterinarians with Texas A&M and Kansas State University for advice when dealing with the case, as well.

Toxic gasses can’t be ruled out at this time or possibly a liquid that was consumed, says Lance Brown, district ranger for the Cimarron National Grassland.

“We’re still in the investigation process to determine the cause,” Brown adds.

Motorized and non-motorized access stopped on Dec. 18, 2015 to four sections of the National Grassland when an emergency order was put through by the U.S. Forest Service for public safety. Entrance to the Stirrup Oil Field region of the grassland near the Cimarron River Corridor will not be allowed until May 1, 2016, or until the order is rescinded.

The lack of access this winter will not impact cattle producers who utilize the Cimarron National Grassland because the grazing season runs from May 1 to Oct. 31. Oil and gas companies are still allowed to enter their leases in the closed area and are using caution.

Immediately after the cattle deaths the owner removed the rest of his herd from the area, just a week prior to the grazing season ending.

“Anytime you’re on a pasture and you have multiple acute deaths that happen in a short amount of time you’ve got to cut your losses and move everything,” Barnhardt says. The impacted producer saw no lingering issues in the cattle herd after removal.

“It is kind of a unique situation we’re dealing with and I’m honestly afraid we’ll never find the answer,” Barnhardt says.