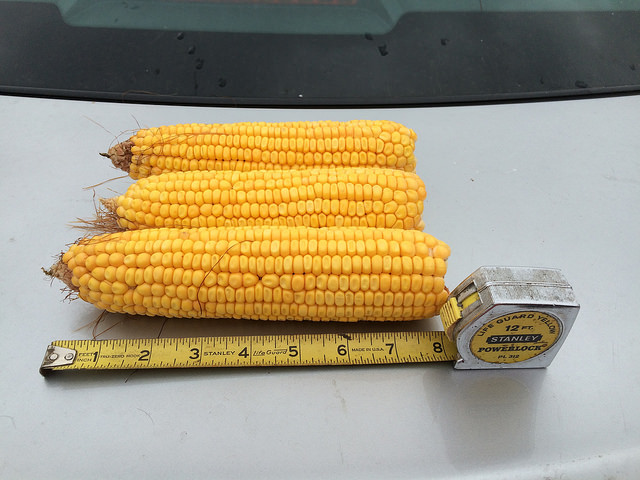 Even irrigated corn in Nebraska is weaker than expected.
( Alison Rice/Farm Journal )

The western leg of the ProFarmer Midwest Crop Tour is trucking through Nebraska, and at first blush, scouts were seeing some strong ears.

But along with the good ears, there have been plenty of rough ones. Water damage on irrigated fields and dry land corners are showing stress.

Not hard to see the dry land corners this year. #pftour16 pic.twitter.com/nd9GSBxtyI

Our first 4 #corn stops in SE #nebraska. All irrigated. This stuff should easily be making 200 . #pftour16 pic.twitter.com/QlPfAJcsUB

Green snap has also been a dropping yield estimates.

Beans may be in a similar boat. Early signs of promise ...

... Have given way to rough patches.

And after just a day and a half, the sun may be taking its toll. This scout is from Holland, but thinks he can pass as a Cornhusker.

Robert, from Holland, thinks he has the Nebraska accent down. pic.twitter.com/Ql3Hz9uCDw

Stay safe out there scouts, and those of you scouting along at home.

Be sure to follow AgWeb’s coverage of Farm Journal Media’s Pro Farmer Midwest Crop Tour. Watch reports from the field by following Farm Journal Media journalists along for the ride: Alison Rice at @agweb_alison, Ben Potter at @potterben, Chip Flory at @ChipFlory, Brian Grete at @bgrete, and Betsy Jibben at @BetsyJibben. And check AgWeb each evening this week for the day’s freshest summary on what they’re seeing in the field.

Wondering how Crop Tour samples are taken? This video will explain it in less than two minutes.

You can join the tour from home and win big! Just share your own crop photos with the hashtag #pftour16 to be entered to win the Midwest Crop Tour Sweepstakes. Click here to find out more.