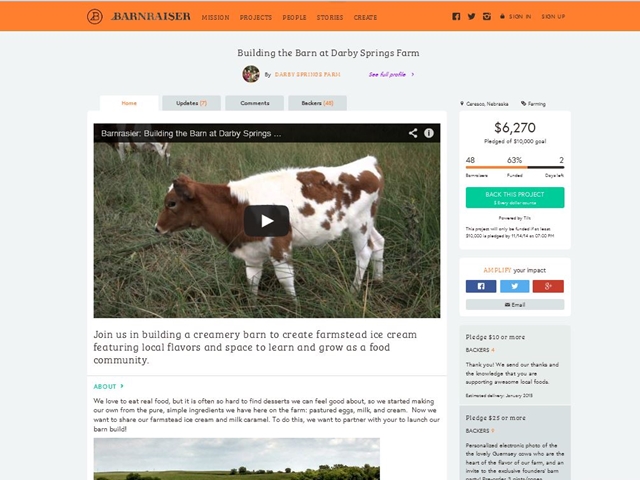 Crystal and William Powers, who run Darby Springs Farm outside Lincoln in southeast Nebraska, are holding their own "barn raiser." But not on the farm; this one's online.

The couple have turned to the Internet to try to raise the money they need for a barn that will include milking stalls, the Lincoln Journal Star reported.

The couple had lived in Ithaca, New York, before moving to Nebraska. In 2009, they bought their 40-acre farm.

They now have five Guernsey cows and 50 laying chickens, and they sell unpasteurized milk and eggs. But they want to grow their business by building a barn for an expanded dairy herd and opening an ice cream parlor and creamery.

So far, the Powers have raised about $4,000 through Barnraiser, a crowd-funding website where people can donate to support sustainable agrarian projects.

Their goal is to raise $10,000 to pay for the design work on the barn. If all goes well, they'd like to start construction next year and open the ice cream parlor and creamery in 2016.

Total cost of the post-and-beam barn is estimated at $125,000. The couple plan to get most of the money from a mortgage loan and groups like Slow Money, which finds investors and donors for small food enterprises, organic farms and local food systems.

Crystal said she and her husband aren't trying to reproduce a romanticized version of a farm where things were done mostly by hand and without modern technology.

"We don't want to be a tourist farm. We want to be a working farm," she said. "We want people to understand how challenging it is to bring food to the table."

William Powers, executive director of the Nebraska Sustainable Agriculture Society said their barn project as a way to improve the life they already enjoy. It's a great place to raise their two young boys and teach them about where their food comes from, he said.

What do you think of the Powers family's approach? Would you ever crowd fund for your own farm? Let us know on the AgWeb discussion board.