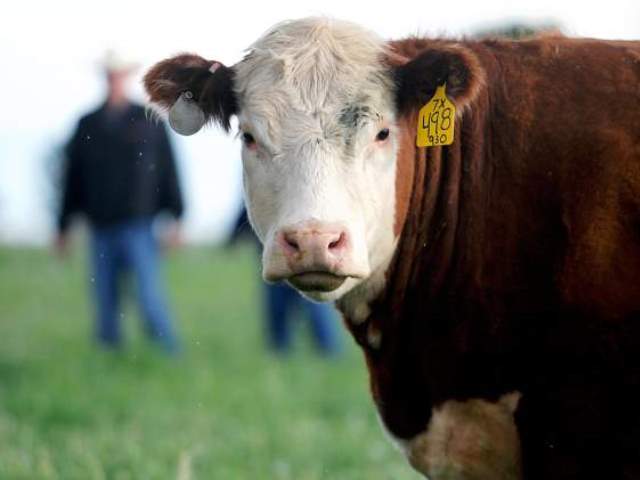 The beef industry is still rebounding from 2012's drought and now cattlemen are facing new challenges.
By: Nikki Work, The Greeley Tribune

At Marshall Ernst's ranch in Windsor, Colo. the curly white faces and red hair of Hereford cows stand out against the green and brown patches of pasture.

For nearly 40 years, Marshall and his wife, Barbara, have run their herd of Herefords, an operation built around breeding and advancing genetics. Ernst loves Herefords. They're sturdy, adaptable and good mother cows, but the best thing about them is they've been dependable through difficult years. Ernst expects his family will need to rely on the herd again soon as the cattle industry goes through some changes, the Greeley Tribune reported.

In 2001, the Ernsts moved to Windsor. From then until 2012, it was dry, and the commercial calf industry took a big hit and the national cattle herd numbers dwindled. The Ernsts were able to weather the storm because of how well Herefords can get through the hard times.

After the drought came the perfect storm of low herd numbers and high beef demand, Ernst said. In 2015, cattle prices hit an all-time high. The beef industry started to rebuild.

May is National Beef Month, and states are celebrating the commodity and its place in the agriculture economy. In states like Colorado, a strong beef industry means a strong agricultural sector. Terry Fankhauser, the executive vice president of the Colorado Cattlemen's Association, said ag is Colorado's second-largest industry and beef is the largest commodity within the sector, with revenue from beef making up 60 percent of the industry. The total number of cattle in the state is at about 2.7 million head, he said.

Greeley is the birthplace of the modern feedlot system. In 1906, the Monfort family moved to an 80-acre plot north of Greeley. Warren Monfort bought 18 head of cattle in 1930 and turned them into a cattle feeding business. He and his son, Kenneth, thought it would be a smarter business model to bring packing plants to where cattle were fed, rather than shipping cattle to the plants, so the Monfort beef packing plant opened in 1960 in north Greeley. The company expanded, built additional feedlots, added a lamb-packing plant and went through several mergers and sales. That plant eventually became JBS USA.

Since the drought, ranchers have been in what's called a restocking phase, Fankhauser said. Every year, 5 percent more calves are being born.

In the past 20 years, calf prices have run the gamut from the highest they've ever been to the lowest, Fankhauser said. The cattle industry used to run in 10-year cycles of highs and lows. It doesn't do that anymore, and now, there are additional obstacles in the way of the significant growth the industry is ready to do.

One of those issues is how to grow alongside metropolitan areas. Fankhauser said it's important to realize cities are growing — and that's not going to stop. He hopes developers will build upward in Colorado instead of outward. But vertical growth can only do so much when it comes to water and air resources. It's time for farmers and ranchers to look at what they can do to help keep growth agreeable on both sides, he said.

"I think there is opportunity even through that growth," he said. "If we can manage that growth in nearly a harmonious fashion with the ongoing continuation of ag and really understanding, I think a relationship can be made that can be quite productive."

But consumer challenges when it comes to the beef industry aren't just local — they're global. Fankhauser said U.S. consumers have a great demand for beef, but there's a ceiling for how much they will consume. The greatest opportunities for producers lie in foreign markets and in opening trade paths, such as those available in agreements like the Trans-Pacific Partnership.

"International trade is paramount to the U.S. because that's where our customer base is going to lie," he said. "As you see more of a well-to-do society establishing itself (in developing nations), they want better quality food, and what they really want in protein is U.S. products. The optimistic side of our industry is tremendous in these countries."

For Ernst, some of the biggest challenges facing beef in Colorado aren't overseas. These issues come from competing industries. Expanded dairy production in Colorado, especially in areas like Weld County, causes competition for resources. That puts pressure on the beef industry, Ernst said.

"It's driven costs up," he said. "It hurts in the pocketbook, there's no two ways about it."

With beef prices starting to slide back down, these increases in outputs are hard to swing. Sometimes, though, the extra spending can be beneficial in the long run, like in the case of genetic research, he said. If you can find ways to make your cattle better and make more money later, that expense may be worth it.

For Ernst, genetics are what gets him by. His Herefords are sold to other Hereford breeders, but also crossbred well, especially with Angus cattle. The babies then are called Black Baldies, an in-demand breed.

"What you spend on is key to success. Sometimes, we get to be a little bit penny wise and dollar foolish," Ernst said. "More expensive genetics could help cattlemen. Spend money wisely, but you get what you pay for."